When playing non-tile-related games it’s polite or even just normal for a guy to say ‘gg’ after the end of a game. Good game. Perhaps it was a long drawn-out struggle, a close match going down to the wire, or perhaps the newcomer was totally outclassed and outmatched. Either way, the better player won, and the worse guy learned something, or at least is taking his defeat like a man. I’ll be the first to admit though, that after losing a game of mahjong, ‘gg’ won’t be the first thing that comes to mind, only taking precedence after “what the fuck” and “I can’t believe this shit” or alternately “yeah whatever”.

Many times when we get together to play mahjong you’ll see people raging over newbies doing this or that – usually centering around making cheap yakuhai/open tan yao hands. Is it wrong then to assemble these hands, and does making them make me a noob? Why is it then that similar hands play a huge part in high-level play as well? Does ponning a haku make me a high-level player, then? Obviously not. The short answer is this: how well you play has nothing to do with whether you win.

…in the short term, that is. Say what you want about magic sand and the heart of the tiles, but at the end of the day mahjong is an EV game, and you have to make +EV decisions. There, I said it. Thing is, mahjong is fundamentally different from many simpler games, in that doing the same thing over and over again may not be a recipe for success – unlike most sports, where you just have to keep shootan dem hoops or scoran dem goals and hope the other guy scores less. Mahjong is a game of chance where it’s perfectly natural to lose. In fact, before you’ve even started, there’s an overwhelming chance you have already lost the game. 75% is not an easy feat to overcome.

But, you might say, there’s this dude that wins matches all the fucking time! I never win when playing against him no matter how hard I try! It can’t be just luck on his side! He just rapes people like… a thing that rapes! A lot!

Mahjong is a 25% game. Everyone gets a fair quarter of the pie.

So stop dropping your fucking pie on the fucking floor.

25% is the best-case scenario. If there are holes or weaknesses in your game, you’ve already given up a good portion of your chance to win, because you won’t be able to take full advantage of the chances when fortune smiles on you. Sure, a person can run hot or horrible for quite some time, but if you just can’t seem to win no matter what, it’s time to go inside your own game for a look. What’s that? I said playing skill has nothing to do with winning? Well, the opposite of that is obviously not true – you can be terribad and consequently never win a single match ever. He’s just scooping up your pie.

But let’s get back to whatever I was trying to talk about before you distracted me. Thing about mahjong is that winning the same 2000-point hand can make all the difference in some situations, and in other circumstances you’re doing nobody a favor. Not even yourself. The difference is situational something. I’ll get back to you on that, when I think of a nice word – situational strategy sounds fine but it’s not really a strategy here, while situational judgment sounds a little too severe, don’t you think?

What is this situational something I am talking about here? It’s what you should have done before tossing your riichi stick out there, or after drawing a funny tile and suddenly your 5+5 seconds seem to melt by in an instant. It’s assimilating all the relevant information and factors present up to this turn, and making a judgment call on where to go from here. If possible, it is best to take some time for quiet reflection, as demonstrated by Kaiji below. Of course, if you’re playing on tenhou you can’t plead a bathroom break, so you better make the most of your 5 extra seconds. 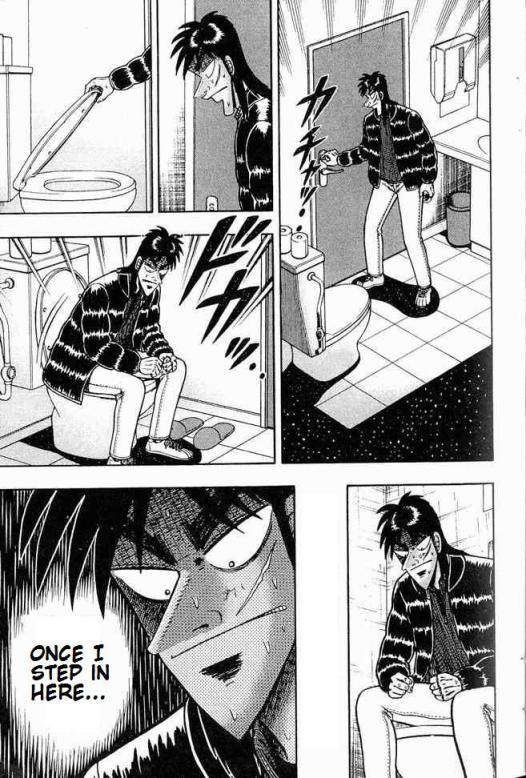 However, it usually still means making the best you can of woefully incomplete information. For me, I generally don’t try to ‘read’ hands, which may be surprising to you, so the bits of information I have to mess around with are those macro factors that are more apparent, the placing/score situation, the round/match situation, my own hand, opponents’ potential hands, etc.

And this is what helps me win, yes?

Sadly, not really. The decision-making process is just a tool for making the best plans possible given the situation at hand. Whether you actually win or even whether it’s actually accurate is irrelevant. You can make all the best decisions possible and lose just as easily.

If you’re a relative beginner it’s tough to separate playing well with winning, the two things that seem to go hand in hand. Many of my best games are when I drop to 3rd or 4th place but keep my cool and play a solid game, taking chances and making all the right calls, and finally, after lots of spirited struggling… nothing much happens. Well, what did you expect?

Still, mahjong is a game of losing. That’s why it’s so much more important to learn to hang on to the games where you should win. Play to win, but expect to lose – that’s how you’ll achieve satori. And don’t forget to read your SICP.