Eventually I get to IC (http://www3.imperial.ac.uk/), roll-cancel my way through the security and make my way into the mahjong room. Inside were seated 8 guys. One set of four were playing Chinese Mahjong. I could tell because of what they were saying and the common dead pool. I ask them, ‘Where’s Jason?’. To the right were a group playing riichi with Chinese/Hong Kong sized tiles. They had the counters. I asked them what they did about the ‘aka 5s’ and Jason said they painted them in! Then my brain became useless as I asked how you would play with two aka 5 pins as this would make an extra tile. Take two normal 5 pins out! Dur! Obviously!

I was not disappointed. IC students are always an intelligent bunch. I had thought about doing my Master’s there, but fate turned me to another direction. Reputation for IC students intact! They knew their stuff. Me, being the least experienced riichi player (it was my first r/l game, c’mon!), they were really really really helpful in pointing out if I had 1 yaku or not. Also, at one point, I was in tenpai with a 147m wait, but they pointed out later that I had discarded the 7m, so I was in furiten. Sharp. I dealt into someone’s hand twice; Jason’s friend, Yuki. Annoyingly so, as both times the tile talked to me to say, ‘Keep me! Keep me!’. So it was more for experience that I dealt it. One time, it was for Yuki’s two sided wait. He was waiting on 69p. Jason drew the 6p and kept it. I drew the 9p and discarded it. Couldn’t really see for sure if that was his tile or not. Because he discarded the 8p on his second turn.

So here I am, not won a hand yet, Jason’s won maybe one, His brother, Sammy (sp) had won one. Yuki had a streak of 3, which was broken up, but he was still definitely chip leader (however you call that in riichi MJ). Closest I had gotten to before was tenpai on two hands.

They were placing the ‘bon’ sticks in the corner of the wall. As a bonus? And each time the ‘oya’ changed, the sticks would increase in value. I didn’t really understand that. Maybe a kind soul reading can explain to me. (They did at the time, but I was trying to take in other things, so that explanation went in and out of my ear!)

We come to ‘oorasu’ (オーラス). I’m dead last. Jason is third. Sammy second. Yuki first. By a long way. Still hadn’t won a hand. Collecting tiles, I kept getting pairs. Should I try to get a quick win by ‘ponging’ my way to victory? So at least I can say I won one game. No, that would be sh!t. Yay, I won a game, but I was still dead last. Garbage. Let’s see what develops. I discard 7p. ‘Chi!’. I discard 9m. ‘Chi!’.  Hmm… 789 sanshoku? Then the tile came. My choice was 2s or 6s. Jason already discarded one 2s. Chances are that the other 3 could be in people’s hands. Sammy hadn’t discarded any bamboos. I chose to discard 2s and call ‘riichi’ for a single wait on 6s. ‘Chi!’. Great, Yuki must be in tenpai now. I think I did the order for calling riichi in some weird way. I put the ‘bon’ down first, then the tile sideways. That can’t be a chombo, surely? Anyway! Jason calls riichi. Damnit. I could be dealing into him. Then I would be dead dead last. I know for sure Sammy needs bamboo tiles. He chi’d Jason’s 9s. Come the fifteenth turn, I reach for the wall and get my 6s.

Tsumo. Riichi. Chitoitsu. Dora dora. (Someone tell me if this is the right order to call out my hand.) Is my hand a mangan or a baiman (or neither)? And also, should I have put the 6s tile there or not to indicate tsumo? Take a look at the picture. Thanks, guys! 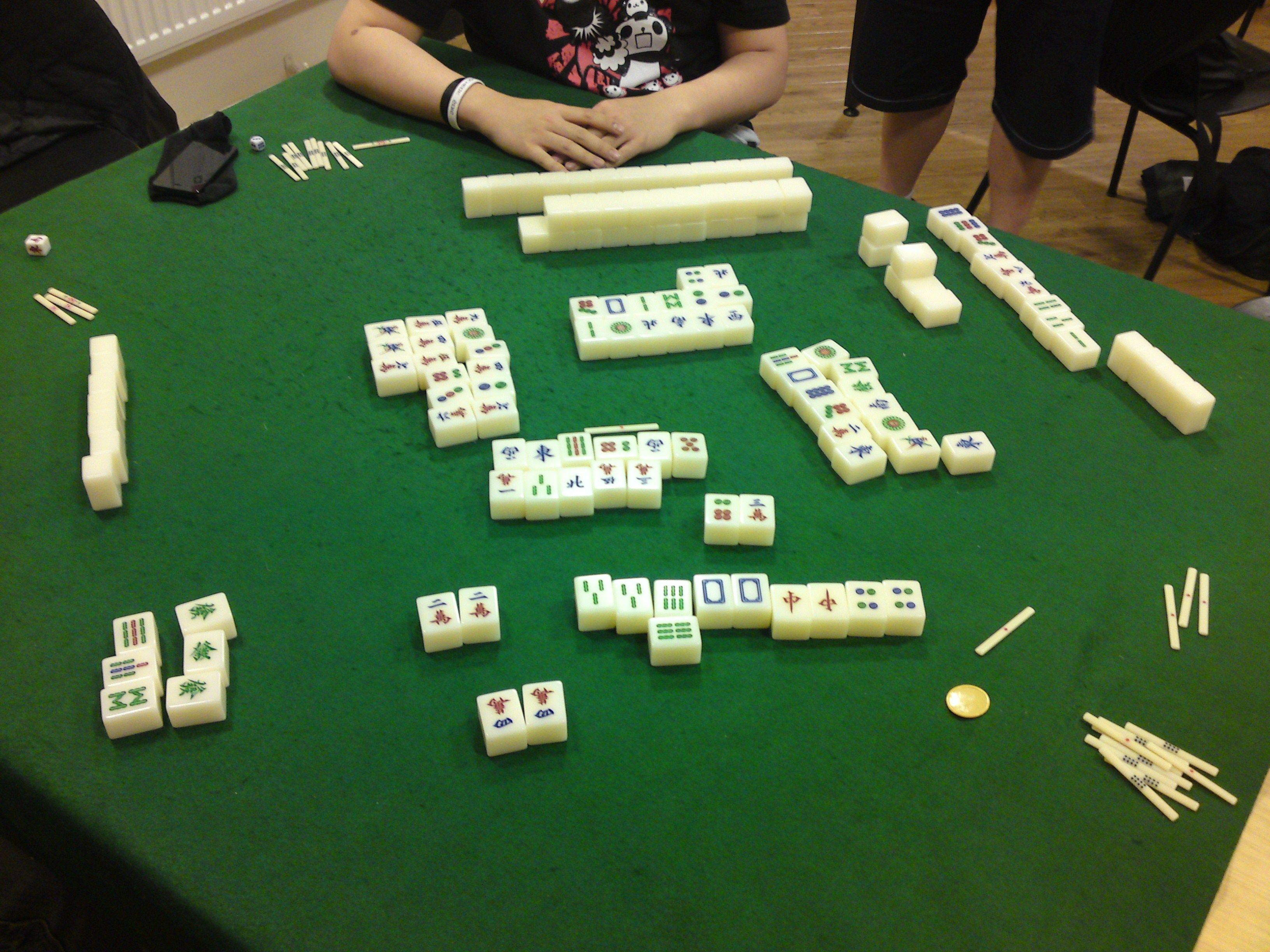