Osamuko members seem to be prone to going to Japan. Deniz, ronronronronron, and now me. As some of you know, I went to Japan to play some mahjong. I’m in Amagasaki-shi right now, in Kansai. I have never been here before, but I always enjoyed playing some mahjong online or with friends, and I was pretty confident about my playstyle.

Osaka is pretty close, so I decided to stop at Marchao jansou in Umeda, a free parlor (this means, uh, betting). They very kindly explained the rules of the store to me, and made me feel really welcome. I’d recommend going there to anyone who has a good grasp of Japanese and rules and manners of mahjong. This is important. So, how did playing in Japan go?

The first day I showed up, I changed 10000Y (uh, about 100 dollars) into game chips (in Japan, betting is illegal, so you basically pay for this fictitious money to bet in-game, and then cash it in afterwards) and sat to play some Ten-go. This means, every 50Y = 1000pts (riichi stick). They use the Ultima auto-dealers; they reveal the dora and give out the starting hand out to every player automatically. HOWEVER, the dealer must still take his first draw from the wall… and it’s very easy to forget to do this. I think I made shouhai (12 tiles in hand) about three times, go-pon (wrong pon) one time (penalty is depositting 1000 points on the table), among other disastrous mistakes as my hands kept shaking for the first 7 hanchan.

I used to think “I’m used to playing online. In real life, I could be even better. You have more thinking time, you can read other people’s tenpai more easily, and watch their movements with more ease. I’d be a very fast player.”

Unfortunately, this was not the case. Even for real life, everyone moved even faster than online, I didn’t get too much time to think about my next steps in my hand, and felt pressured to discard rapidly (mind you, no one was hurrying me, and you can take your time to think if you say “sumimasen,” but you kinda feel like you better not think too much and just discard). With such speed, I didn’t get enough time to look at the table, made dumb mistakes constantly, and even once I won a hand, I didn’t get a chance to think how much it was worth before, and ended up being very awkward (“Ron! Eh… excuse me, riichi, yakuhai… ura dora, eh, 20…30…40…50fu…” “Tsumo… riichi pinfu… eh…”) even though I know this stuff by heart. I was so nervous I couldn’t even remember the charts, and was like “whatever, if they say it’s 6400, let it be.”

Another reason I couldn’t count score so easily, was that not only you have to count score, but the amount of chips. This parlor uses 100Y coins as chips, and you receive one every time you score ippatsu, aka dora or ura dora. http://www.osamuko.com/2010/10/18https://osamuko.comhttps://osamuko.com/how-to-get-better-at-jansou-mode/

Also, in the case of a ryuukyoku (draw) the dealer always rotates, so there was a lot of damaten (silent tenpai) from every dealer, and it would get pretty dangerous from middle game on, specially if you don’t have red dora in your hand. Every direct hit you get with red dora, will impact your pocket immediately.

Gladly enough, everyone was kind enough to help me get the system right, and after a few hanchan my hands stopped shaking and I could enjoy myself some more.

Another thing to enjoy is that, drinks are on the house! You can drink as much as you want while you play, you won’t be charged. The only charge you have to pay, is the table fee after the game ends, but the staff takes care of it, they deduce it from everyone’s score, and supervise that the point/money exchange between the players is accurate. Also, the very same automatic table itself converts points to yen. Pretty useful, huh.

The next time I came in to play, I exchanged 10000Y again and sat to play. My hands weren’t shaking anymore, and I could actually feel like I owned the place, could tell my points fast and clearly, and felt like I could win again. Until, eventually, I started losing, and then I lost it. I dealt into a few ippatsu (some of them while I was in riichi myself, or some people made two or three riichi in the same turn), lost a few times and felt like an idiot, so I started playing like an idiot. I let go of my system, and from then on everything went worse. I was completely cracked under pressure at that point, looking how my stack grew shorter. I couldn’t think of what to do, so I resorted to occult as well, trying to “erase my presence” by not calling tiles and not dealing in. From then on things went better, but I was already losing a lot. The old man to my left was very nice and polite, but on the table he was a complete cruel monster who seemed able to complete every yaku in the history of mahjong. Haitei, rinshankaihou, chankan (on the dora as well), he kept winning them all and taking everyone’s money as he smiled and was being just really nice. He was a good player, a cordial winner and even at the very few times he lost, gracious in defeat. I don’t mind losing money to people like him, I guess. I ended up losing those 10000Y. But I want to keep playing him some time. I charged another 10000Y and after losing 1000Y of those I went back to the bookstore with my girlfriend to pick up some mahjong theory books. Kagaku Suru Maajan, Ara System, Hisato Note and Note X, Saisoku Saikyou, among others. Mainly stuff on digital mahjong. I didn’t want to get my hands into occult just yet.

You see, the problem there is that even if you win, the table fee is such that you’re not winning much, and whether you’re second or third, there are many cases where you just end minus. If you don’t win pretty much every hanchan, you’re going to be minus, after all. And if you lose most of them, like I did that day, your minus is going to be pretty big (about 120 dollars in a day!).

Not only did I play at a parlor, but I also played with Kyoukai’s professional player AkihiroKawamura, featured in a past article: http://www.osamuko.com/2011/06/03/pro-player-interview-kawamura-akihiro/

We played a few home games, and made a niconico broadcast of it. Betting is illegal in Japan, so even if we were betting that night at, let’s say, about 30Y every 1000points, and I’m not saying we were because we weren’t, and even if we were I wouldn’t be able to say it, but if we were, I would have lost 1600Y the first day, and won 100Y the day afterwards.

Kawamura’s mahjong is amazing. He completely dominates the table. But he’s a good guy. He is a very considerate person, like most, if not all, of my Japanese hosts have been so far.

Anyway, for a country that doesn’t allow betting, I sure lost a lot of money in mahjong. And in mahjong books.

You can see my not so great marchao stats here: 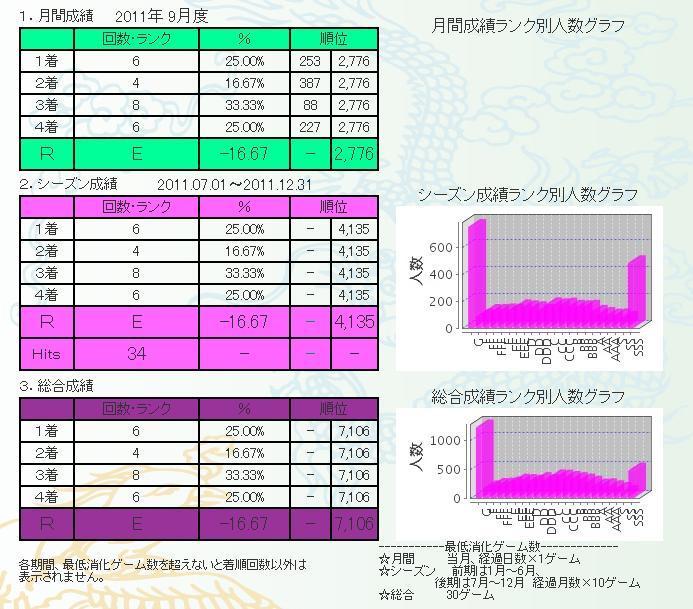 More on mahjong after the break.