Following the last article on Tsuchida Koushou, I want to keep introducing professional players from Japan. Today’s article features Kawamura Akihiro (川村晃裕) from the 日本プロ麻雀協会 (Japanese Professional Mahjong Association), and I actually got to make him some questions for this article.

Kawamura Akihiro (川村晃裕) was born in Aichi-ken (愛知県) in the Chuubu area of Japan, on June 3rd, 1986. He joined the Japanese Professional Mahjong Association and climbed his way up to the C1 division in the Mahjong King league. He is also a playable figure at the arcade mahjong game MJ4 Evolution.

Kawamura defines himself as a digital player, and his field of expertise is “naki maajan.” Because of this, about half of the hands he plays are open. He could be seen as a very agressive player (“super swift attack style”) but his defense is also very strong. Indeed, winning before anyone else can get their tenpai, and folding when they do, is the ideal way to avoid dealing in. Consequently, even though his hand-win rate is much higher than average, he’s not the type to just discard everyone else’s winning tiles. He makes it very clear that there is a difference between “attacking” and “pushing.” This style makes him very fit for either real life or internet mahjong which he also regularly plays.

Before anything else, let’s see his MJ4 Evolution profile: 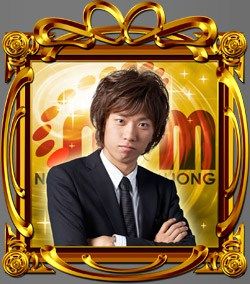 Origin for his phrase: His surprising dora tanki and daiminkan are in most cases successful.

**Reason for starting mahjong: **Taught by my superiors at college.

Rival: People in my same league.

**Beliefs: **In mahjong and in life, good manners.

Reason for becoming pro: I didn’t have any experience at parlors yet, but I had read a lot of strategy books and a whole lot of mahjong manga and my fascination towards professional players began to grow.

Happy moments when playing mahjong: Win or lose, the moment when you feel your own growth.

A match that left an impression on you: A certain competition hanchan.

What is the reason: I didn’t get to win a single hand, but I won just by tenpai payments.

People you respect: People who don’t judge other people’s discards.

What do you like best other than mahjong: Internet.

What is necessary to improve at mahjong: Rather than getting used to it, study it! Steal for yourself only the good things from good players.

A word for fans: Feel free to call me at MJ for a match, let’s have a good time.

Q (xKime): When did you become a professional player?

A (Kawamura): I was in college at the time, I was fascinated by a lot of books on mahjong, both strategy and manga, and also playing the arcade game MJ.

Q: What kind of mahjong manga do you like?

A: I like Fukumoto’s work. Especially Akagi. There are many others that I like and have read, though.

Q: Did something change since you became a professional player?

A: Not really, it’s just the same. It’s still a good feeling when I win, and I don’t make it a big deal if I lose either.

Q: You don’t lose your cool when you play?

A: It’s important not to get mad. You shouldn’t get angry.

Q: So, how did you family react when you told them you wanted to be a professional mahjong player?

A: I told them -after- I became a pro. Anyway, I was already in college, so it was up to me.

Q: At what point did you realize you were good at mahjong?

A: Since I was born. Probably by the time I came out of my mother’s womb. I’m not sure about that, I didn’t really think about it.

Q: There are many different professional organizations in Japan, why did you end up choosing the Japanese Professional Mahjong Association (JPMA), and not for example JPML?

A: Well, Renmei (JPML) uses “competition” rules where there is no red dora or ura dora, and every organization has its own rules, I just liked Kyoukai’s (JPMA) rules better than the others.

Q: So there’s no bad blood with people from different associations?

Q: How would you say that it’s possible to become good at mahjong?

A: Being taught by someone really skillful, and taking the best things from that person. I’m constantly teaching a lot of things in my live streams, showing the good things of naki maajan (mahjong with a lot of open hands).

Q: What do you think about the pros who concentrate on concealed hands?

A: I greatly respect them. I think the most amazing mahjong is menzen (concealed) mahjong. If you can get good results with menzen mahjong, that’s very strong. I respect people who can keep their menzen. I used to try to keep my menzen most of the time too at first, but the results weren’t that good, and then I learned this way to play.

Q: How did you learn to play like this?

A: I was taught this kind of mahjong in Nico Nico Live Broadcasts, so I started playing naki mahjong. I didn’t fully understand “digital style mahjong” back then, and of course I’m digital but, there were a lot of things I didn’t really understand at the time and I eventually started learning them.

Q: What is your goal as a mahjong player right now?

A: I want to be acknowledged. Since I want to stand out, I’m doing Nico Nico live broadcasts too. And of course, I want to make a living by playing mahjong.

Q: What do you do when you’re not playing mahjong?

A: Cycling. I like to listen to music while riding a bike.

Q: If it wasn’t mahjong, what game would you have ended up doing now?

A: For board games… I don’t know, shougi or go. But I really wanted to be a baseball pitcher.

Q: And, what are things you hate?

Q: Wasn’t it you who said “a tenpai hand is better than a one-away hand of any shape”?

A: It wasn’t me who said that, but it’s a good phrase.

Q: Do you have a last “cool phrase” you want to leave us with? Something like “mahjong is about winning” or anything like that?

A: Mahjong is a game that sickens you, but you keep playing anyway.

Kawamura has a Nico Nico community where he is regularly doing live broadcasts playing online mahjong (Janryuumon and Tenhou) as well as friendly matches, study sessions, skype connections and conversations.

He is a 9th Dan player in Janryuumon and just recently began playing on Tenhou, climbing up to 5th Dan 2100R in about 230 games, and probably still going up as I’m writing this. He is constantly quoting Akagi as he plays, and he is also a very kind broadcaster and host, so be sure to drop by and see him play.

Kawamura also has a a Japanese blog where he posts mahjong related content constantly, and a twitter.

Also, this is being published on the exact same day of his birthday, so you may also twit him a happy birthday. Happy birthday, Kawamura. May your mahjong reach a lot of new spots.