When you see a website posting an article titled “Mahjong Strategy” here, one begs to ask the question: Is this a serious article? The answer is usually no for a variety of reasons. This one isn’t for all those reasons at once.

See this image, sourced to “Zhang bin fj / Imaginechina”. Do you see anything wrong with an article claiming that a) Mahjong is played with 160 tiles, b) Mahjong hands are made with 13 tiles, and c) you use this image to jazz up your article? 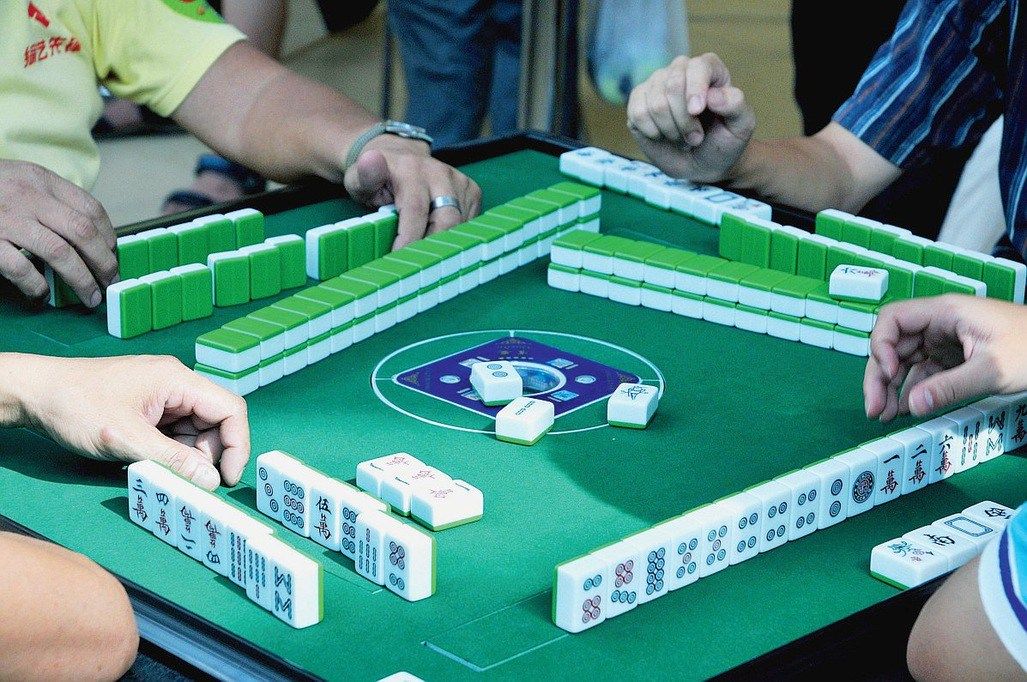 I count 16 tiles from buddy on the right, plus 4 more in front of him (20). Chummy on the left has 13 tiles currently in hand, 3 in front of him, but messed up like a discard, and some in the corner we can’t see well. Notice the 6m dora on the end of the wall, all a bunch of beautiful things MCR doesn’t have, in a fluff piece to promote MCR and/or pad a news publication with shitty Lifestyle articles no one gives a shit about.

It’s sad to say this, but the French group MMSP (their name is ridiculous, so I’m not rewriting it in full) decided to sell out by participating in some news site’s fluff piece on mahjong. This in itself isn’t a problem, many other organizations use news media to get their name out there for publicity and recognition. The problem lies with what they considered newsworthy. With no editorial control or even a right to inspect the content. The image used could have been a dead fetus and present the same level of integrity and pride a mahjong table with the wrong amount of tiles, presenting the wrong variant’s rules with more than enough information that a 5-year old could take the article apart for gross inconsistencies. **Yes, I said it, I am officially better than a 5-year old. **

This is the state of mahjong in 2012. It’s always presented as an exotic game meant to improve memory function and capacity, glorifying most Westerners’ experience of playing some variant out of the public eye (family shindigs or seniors’ clubs), then magically coming together in groups supposed to promote international and intercultural exchanges? Are you fucking kidding me? If you tried sticking any of those descriptions to poker, you would be looked at like an alien from planet Zorblax. Why is it acceptable for mahjong to treat it like some Asianese thing to exploit for its perceived cultural exoticness? (editor’s note: “chiniaiserie/japoniaiserie” for French readers not used to my use of Asianese.)

Let’s pick this article apart together, shall we?

Article: *au club parisien, elle a appris les règles internationales qu’elle juge « plus intéressantes, plus ouvertes » *. [At the Parisian club, she learned the international rules that she judges to be “more interesting, more open”]

Question: Does more interesting refer to a comparison of watching paint dry or playing “cache la saucisse”? Does more open refer to the fact that she has absolutely no say, democratic or otherwise, to how international rules are created, applied and enforced?

Question: Did the Chinese people, an organization of individuals, or the Chinese government, develop this “sort of convention”? (Answer: probably a heavy collaboration between the two.) How did or can the MCR rules evolve? Did evolving also include the need to relocate the first international tournament from China to Japan in 2002?

Question: Has anyone unironically called it that in a normal conversation, ever? No, so it’s intellectually dishonest to present it as such. It’s not the “Game of Four Winds” any more than it is the “Game of Tenpai” or the “Game of Pon Palace”.

Question: The two most common variants of mahjong tiles used in the world are 144 and 136. Why would you say 160 if it were not part of the rules of the club you are presenting? Why, as a club, would you tolerate total shit being written of the game played at your club by some foreign agent? Why are all tiles considered to be poetic? Why did it take 3 attempts to get the name of one of the suits correct? (And if we’re strict about it, “sapèques” (cash) is the correct term.)

Question: Do they enumerate clubs who are not dues-paying members, such as Nanikiru.fr? No, it’s against their business model. Which ties in to the second bit: Friendly tournaments are “technically free”, but any of the serious tourmanents require you to pay dues of 35 euros, not counting whatever extra cost the tournament itself requires if you are French, because you betrayed the Patrie by not contributing to the mahjong kitty. Pretend you’re from another country if you want to save those costs. You could be from Canada or Zimbabwe if you want to. Or you can pay the head tax, double its original cost of 17.89, yearly. Or join a club, pay their dues, blabbity blah blah blah. The cost to play mahjong in other Francophone environments can be as low as 9 dollars, once for life, to cover web hosting costs.

What truth remains in the article?

That there is a mahjong club called MMSP, that Stéphane Parcollet is selling some literature for 24 euros and that the article was written by Laure Bazantay. The rest is insignificant drivel, or outright untruths defaming mahjong for people who take it seriously.