Now, I’ve seen many people write small articles here and there about where the best place to get a mahjong tile set is.

I originally planned to write this a long time ago but now is as good a time as ever. For one, if you do not have people to play with regularly, do not buy anything over 50$. It’s wasted money, you won’t derive any pleasure at all from the tiles. The first set you should buy is a “China Green” set. You can find these in any city with a Chinatown.

For euros, given the cost of “life, the universe, and everything” being more expensive, these dollar costs translate to euros at a 1:1 rate. 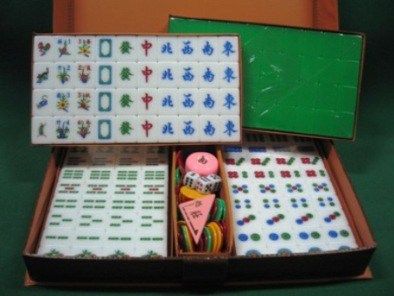 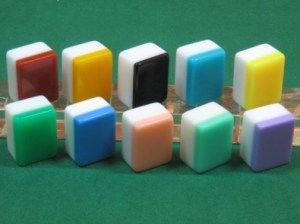 Second: Assortment of two-tone backs. Not that they give the set more value, but any color other than green makes it nicer to look at.) WARNING: Japanese mahjong players like two things: pure-white white dragons, and two-tone backs. All-white or all-black sets are often undesirable (but there can be exceptions) because of weird crap like having to stand the dora tile when you’ll inevitably flip a white dragon.

To be honest, if you’re far away from a Chinatown, you’re probably too far from any real life mahjong players. However, in the digital age, you can order anything over the internet. Which leads to the biggest killjoy of them all: shipping costs.

With eBay, you can often find good deals along with a lot of bad ones, and even more irrelevant ones. Because a lot of people are trying to peddle cheap game software like “Mahjong Quest Puzzle 76 ver. 2.6”, using a subtractive search is necessary. “mahjong tiles -pc -cd -jewelry -wood -vintage -bracelet*” would be a good search to make. Then sort by “price + shipping”, and set the highest first. It’s very easy to ignore the first hits that are irrelevant (anything over 100$) while not having to browse through all the junk at the bottom that is also irrelevant. Ignore anything with no shipping amount, and start going back up at about 10$. There are currently a few sets up for sale, but are going for 58$ when both cost+shipping is calculated to [a secret location]. (osamuko.com recommends you don’t buy it at 58$ though). If you have friends also wanting mahjong sets, some may offer good discounted shipping. Do play with the shipping applets when available.

Shipping also hampers doing the Asianese thing of wanting “authentic products”. Before even finishing the paragraph, I would like to remind people to not do this, unless you know exactly what you want, and are really willing to pay any price. Save up and fly to China or Japan and send them back to you or a relative to pick them up, in the long run, it’s cheaper. Shipping from Japan is absolutely horrible, as almost anything you’d want weighs over 2kg. I got a used set once shipped in two packages simply because the eBayer would have lost money if he sent it as one. (and even then, this was almost 4 kg. It was labeled as a product of Japan, but I am pretty sure what I got was also Chinese.) Then again, there’s also that time I got two sets of tiles for only 3400Y, but with shipping and service fees (because I got it through Yahoo Japan), it came up to 15900Y. Never buy a set from Asia unless the shipping is mentioned up-front. At least then, you can make a rational decision as to purchase it or not. Extra tip: never assume that you’re getting a Japanese set made in Japan. Almost none exist anymore. Most Japanese mahjong sets are made in China, and have the red fives made accordingly.

Also, the more of a novelty item something is, the more chances it will either suffer from a defect or that as soon as something happens to a single tile, the rest is rendered useless. (Chips, scratches, marks, color fades, paint loss). It’s not even a question of being cool or not (because you’re not) if you have a Saki, Yankees or a Hello Kitty mahjong set, that’s one of the worst ways of losing your money.

This also leads to two other issues: tile sizes and partially transparent sets.

For the former, remember that Japan has been playing with small tiles for quite some time, 25mm as a maximum dimension is the norm, although they may get bigger in the future given the amount of elderly people playing mahjong in Japan, don’t expect it to change overnight though. If you got used to playing with “China Green”-sized tiles, playing with smaller tiles becomes less fun to play with. Also, novelty sets may also be of non-standard sizes in order to make the product smaller, and the profit bigger, which leads to the latter point:

Partially transparent sets. (Washizu-style) Some people have the urge to go buy sets that are 3/4 transparent to mimic the protagonist of some comic character. Fine, it’s your choice. But some of these sets are still small, 25mm, 28mm as a maximum dimension. There was a company called Ace of Heartz operating out of Vancouver that had single-tone white opaque tiles but that were 34mm large tiles at a decent price. Their website is under construction though, I hope they come back someday. I wouldn’t recommend a 25mm transparent set to anyone, and much less translucid ones that add more colour crap into the tile while keeping the see-through effect.

Comclusion and quick summary: If you’re paying more than 40$, you’re not getting the best deal out there. Do not under any circumstance spend over 60$. (unless it’s for the Ace of Heartz semi-transparent set)