After I started playing mahjong, I learned one thing very fast. It is great to be in the lead. It’s not just great. It is amazingly awesome. You are like a champion looking down on the rabble, watching them scrabble around for crumbs from your table, more often than not having to cannibalize each other to stay ahead. When a minor threat emerges, you can just put on your defensive armor and snicker at the pathetic attempts at toppling you. Should you choose to take the offensive, you can strike from anywhere, at anyone, with anything. Or if you are rich and bored you can just take a luxurious stroll around menzen mansion and not do much of anything, while everyone else is hanging on your every discard, safe in the knowledge that even doing absolutely nothing can benefit you. Being in the lead is great. But how great is it?

I had nothing to do today so I pulled this out of the unwritten article bin. It looked more promising than entries like “Osamu just tried unsuccessfully to edit mahjong pages on wikipedia for the 5th time” or “Here is a link to a blog that implies mahjong is a fad, and that Alvin created his tenhou documentation site after watching Saki” or “10 projects we are working on that will never be completed”. Though they may be riveting tales of suspense and excitement, this one looks more impressive. Furthermore it contains graphs.

Everyone who has played mahjong knows the lead is the best place to be. This is because:

Here are some graphs generated via analysis of tenhou houou(鳳凰) matches, graphing percentages of people leading in a certain round eventually ending the match as top, according to the size of the lead. Thanks to Umaikeiki for running the figures. He and Alvin only had GNUplot, so I punched in the numbers into an online graphing program for kids which allowed me to choose nice bright colors to show us doing science.

These figures are from houou tables only, where the minimum requirements are 7段 and R2000. You don’t get there by not knowing just how far you can push a hand. Unless you are ballin’ in this very environment, your local statistics may vary. We’re just providing these figures as an interesting study.

Of my favorite colors. 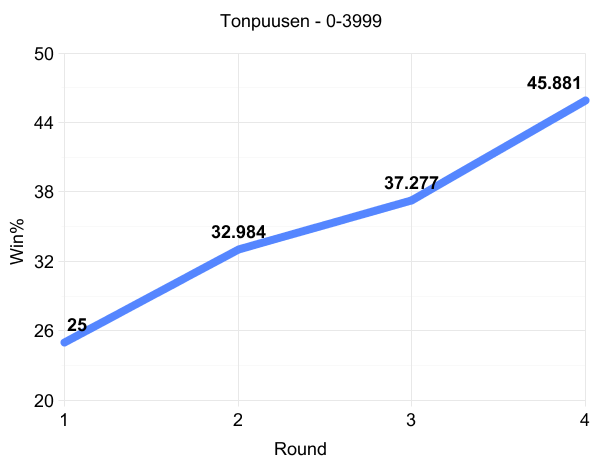 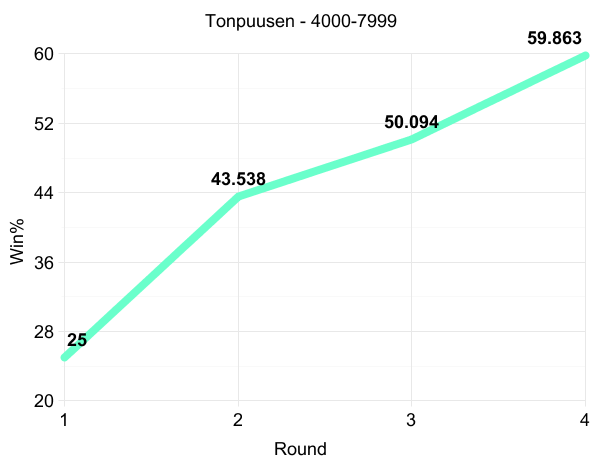 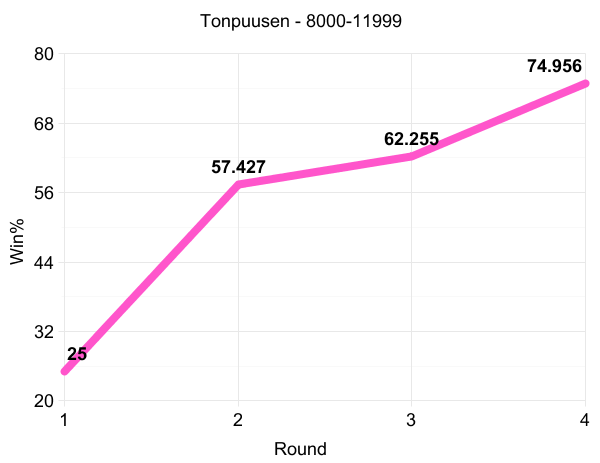 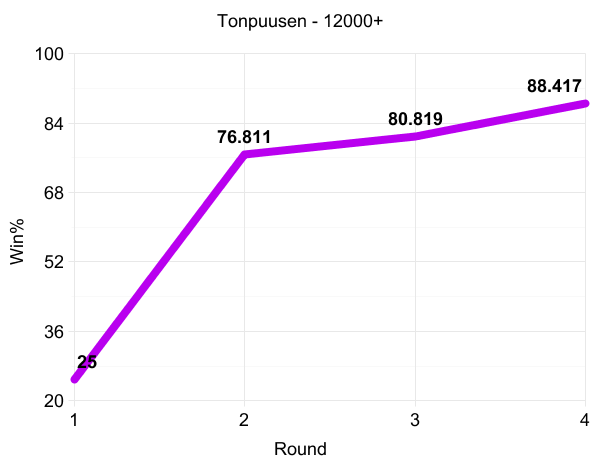 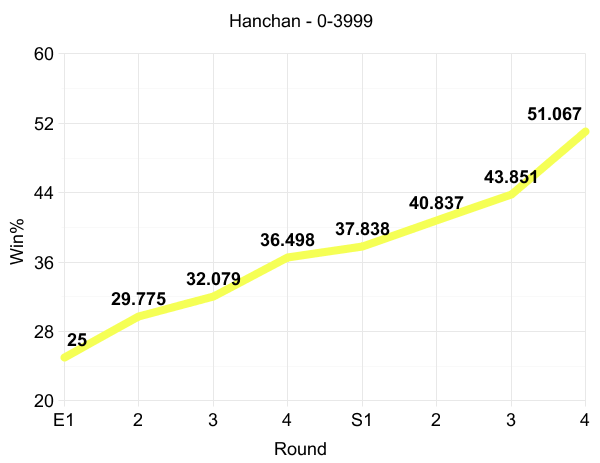 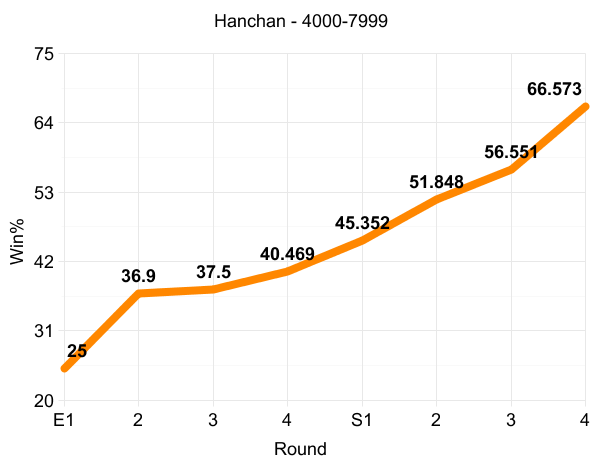 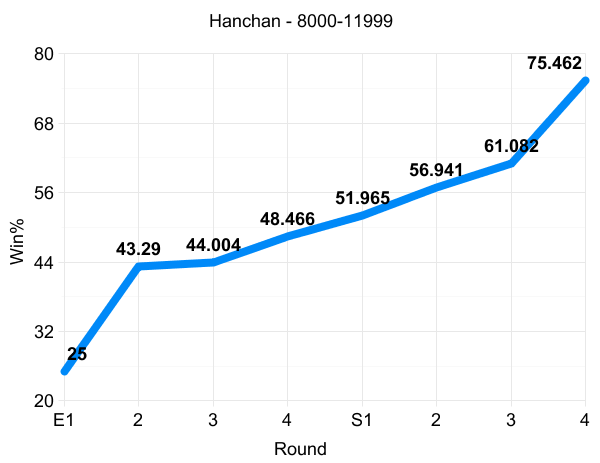 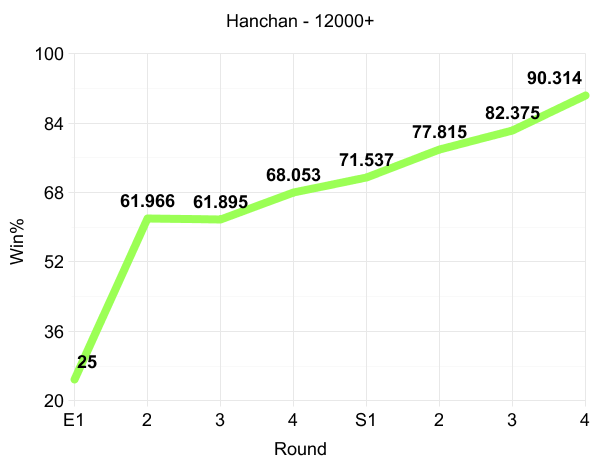 If you still haven’t gotten the point of this article by now, let me hammer it into you one last time. If you are leading by 4000 points, your lead is intrinsically worth more than 4000 points, because the leader has access to all the options available and has a better chance of making the right strategic choice. And even if you don’t, that’s what a point buffer is for. Even if you aren’t doing much and can only stand around, you still have the most HP.

In fact, this may seem a little controversial, but I believe if you think you are a bad decision-maker, and need to win a match, if you find yourself with a potentially big hand early on you definitely should gamble for the lead. Once you win, the pressure is off and you’re in the clear, and if you lose points, you won’t have to agonize over subsequent decisions anyway. Either way you have locked yourself into a position where you don’t have to worry about making the wrong call later on. As a result you won’t surrender EV in later rounds because of bad decision-making.

Of course this is no substitute for working on your game and improving on it. Just throwing this out there – coinflips may not be a great strategic choice for a good player, but you can always rely on them to give you a fair shot.

Until next time, may you hold on to a lead until the very end.

Extra: Here are some more entries/drafts in the pile that will probably not become real articles.

– Nobody can figure out Alvin’s email

– How to win an EMA tournament