This is a public service post to increase awareness of one of the most exciting things you can add to your Mahjong game: Open Riichi. Open Riichi is a nonstandard or “local” yaku which means you won’t find too many places that allow it. There also isn’t a lot of software that contains it; we got our hopes up when Toupaiou advertised it and even included graphics for it in the client, but they never implemented it. However, if you are part of a friendly Mahjong group or club, you can probably add this to your house rules.

Since it’s not a standard yaku, there are many variations on how Open Riichi works. Here I’ll try to explain the variants I know. Feel free to post any others you know about as well as how you’ve been playing it!

First up, what is Open Riichi? It is a variation on Riichi in which you reveal your hand to all players, so they know what your waits are. When you are in a situation in which you can declare Riichi, you can choose to make either a normal Riichi or an Open Riichi. Open Riichi is a yaku worth 2 han (but see below for some variants). Doing this on the first turn (Open Double Riichi) would be worth 3 han, not 4.

A popular variant is to make Open Riichi a Yakuman if someone intentionally deals in. When you make Open Riichi, anyone who’s not already declared riichi has to pay for a Yakuman if they deal into your hand. However, anyone who declared riichi BEFORE you is exempt from this! Beware, as declaring riichi AFTER an opponent’s open riichi means you still have to pay the yakuman. 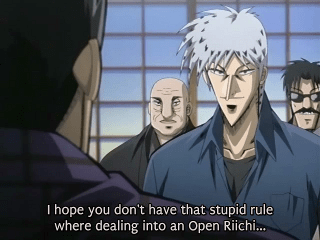 There are also some variants regarding how to open the hand. The simplest way is to reveal the entire hand:

Some will instead require you to only reveal the tiles that generate waits:

Either way, your opponents will be able to know your waits, but the second rule would (usually) prevent them from knowing what yaku you have. Again the choice of which rule to use can open up different strategies. For example, under a no-yakuman partially-open ruleset, one might reveal only a single tile as a Tanki wait. Since there is no yakuman penalty, opponents can consider intentionally dealing in if they think the hand is cheap. However, since the hand is partially concealed, there’s no knowing for sure if it’s a junk 2600-point hand or a suuankou double yakuman!

When is a good time to use Open Riichi? Consider that a lot of advanced players would probably furiten riichi if they had a 3+ sided wait, because even if they can’t Ron, they have a high chance of getting Tsumo. Thus, you might consider using Open Riichi when you have many waits, because you have a high chance of getting Tsumo even if the opponents can avoid dealing in. Another good opportunity might be if you are joining a Riichi roulette. If one or two opponents have already declared Riichi, it doesn’t matter if they know what your waits are because they can’t avoid dealing in. Finally, it may be possible to confuse beginners by using complex waits, but you shouldn’t need such tricks if there is a big skill difference.