Now that I have your attention, there’s no sex. Anywhere near this post. Anyway, xkime again here. I figured I’d leave a breakdown of the “new” stats page of tenhou in here with their translation. Even better, right? … Anyway… 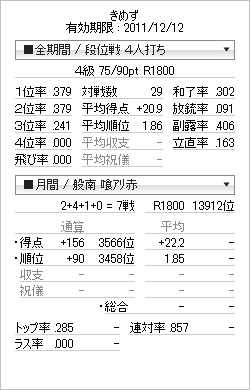 The top row, is your nickname:  きめず

The next link, is the validity for your account. If you’re a premium user, it will tell you when your premium account expires. (Old screenshot is old. w) This is called 有効期限 (yuukou kigen).

The dropdown list contains the different types of games; if you just play the regular 4 player mahjong, don’t bother touching it. It’s just to view different stats. In this case, should you ever need to reset it manually, ■All Periods of Time/Ranking Matches for 4 players. ■全期間/段位戦 ４人打ち (zenkikan / dan’isen  yonin uchi) (Yes, it’s actually yonin rather than yonnin.)

This is your rank and rate. I’ve heard players who are third kyu say they are third dan. Don’t make this mistake, it makes you look silly. Kyu grades are written in arabic numbers (987654321) while dan rates are written in kanji (初二三四五六七八九十). Notice you start as 新人 (rookie/shinjin) and you end up as 天鳳位 (tenhoui) after you pass 10th dan. Next is the amount of points you have and need to get to the next rank. Lastly, your rate (how well you play, though it doesn’t mean much for the first 200 or 300 games). 1500 is the average for new players (新人).

和了率 .302 / Hand win rate. How often you win hands (you know, like theoretically, in four player mahjong you’re supposed to be winning one fourth of the hands, and even less because of draws where nobody wins). Winning, in average, 30.2% of the hands (a little under one third). This can be read as “agari ritsu” or “houra ritsu.” And they’re both right.

副露率 .406 / Calling rate. How often you call tiles. Pon, kan, chii. Ron and tsumo are, of course, not counted. Do note, closed kan are also considered here, as kan is a call. Called “fuuro ritsu” because “fuuro” is a “call”/”open meld”/whatever you wanna name it. You may find it in other servers as 鳴き率 (naki ritsu). 40.6% means you (in this case, me) call tiles pretty often.

You then have another dropdown menu. This is for the “monthly ranking” tenhou has. It only counts for the month, and you need at least 30 games in the month to be officially in it. There are many divisions, for different game types, that you can select on it. If you just click every button and play in whichever game starts faster, don’t even bother.

R1800 １３９１２位 / This is your position in the Rate ranking. It compares how high your rate is compared to other players who play the same mode as you. With a R of 1800 in the general lobby’s hanchan (with aka and kuitan), you’d rank somewhere among the highest 14 thousand. Tenhou is crowded of players with a rate higher to 1800. Contrary to the popular belief. w

Then you have the lines for 収支 and 祝儀. Income, and chips. Only for jansou mode.

合計 means total, and your total for the above info would appear in there once you play the 30 games a month in that game type. It converts all those numbers into a single one, and puts it against the other players’ to give you a more general position. If this ever happens to become 1位、it would mean that you were the best player -in general- for that mode UP until that point of the month. So yeah, pat yourself in the back if that happens.

トップ率 .285 / Top ritsu. How often you took first place (top) that month. Should theoretically be around a fourth (25%) of all games when playing against player of the same skill level. 28.5% of games.

連対率 .857 / Rentai ritsu. How often you took first and second place (non-“losing” placements) that month. Should theoretically be 50% (half) when playing against people of your same level. 85.7% of games

Also, whenever you “need” anything from tenhou in English, just look at this page first: http://arcturus.su/tenhou/

It’s usually in there.

PS: I’m thinking I should have a new column called “SEX” for real. “Simple Explanations by XKime.” It would makes us get more hits.