Well, nobody has written any articles on here for a long time, so MOUIKKAI asked me to whip something up for this blog. However, since I was wasting time with Jun Watarase and Torchlight, an article was posted yesterday, so I can’t be the first article in whatever. Oops, but oh well. Since the gods have struck me with a severe case of imagination block, here is an article on Touhou Unreal Mahjong because I haven’t touched it for months. Hopefully, this might be useful for something, although I don’t know what.

Touhou Unreal Mahjong (東方幻想麻雀) is a game that D.N.A. Softwares created for Reitaisai 6. Revision 2.0 came out in C76. Currently, the latest patch is 2.4a. There is a partial English patch out for 1.6 (but I don’t recommend using it, it’s pretty meh).

Since this game draws from much of the Touhou world (and some that aren’t), one can expect quite a lot of characters. Currently, there are 88 characters to choose from (79 if you combine the same characters that just have different pictures), all with their own power to activate ingame. For example, Chen can change the worth of riichi from 1 han to 2  for that particular round. These powers cannot be used right from the start of the game; one will need to charge their magic bar by drawing tiles. There are one or two tiles that charge more than the others do, this depends on the character. 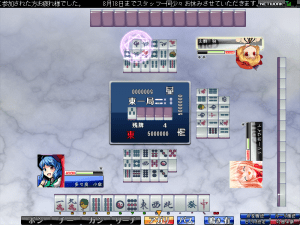 An example of a game. Pon, chi, kan, and riichi are to the left. The orange button in the middle is to ron/tsumo. The button to the right is to pass, and the buttons on the extreme right are to change the bgm, view ruleset, etc. The game automatically lets you know if a tile is able to be claimed with a small magic circle surrounding the tile. 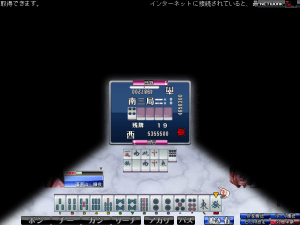 An example of Mystia Lorelei’s ability.  In case you were wondering, I did get nagashi mangan.

**In addition to the usual “choose some characters to throw in a game”; there are several stories for one to play through. For example, the first story is about Reimu’s adventures about the mahjong table that appeared out of nowhere and how everybody decided to play mahjong. There are three rounds per story except for Twilight Bar.

When playing a regular game, there are three choices. The first is tonpuusen 4p, the next one is hanchan 4p, and the last is hanchan 3p. Unlike Tenhou 3p rules, the pei is just a regular tile here. Also, tsumo payments aren’t reduced. A mangan tsumo will give 12,000/8,000 points, not 8,000/6,000 like in Tenhou. There are 13 stages in the game to choose from. They vary in house rules, such as Hakugyokurou having 15,000 points at the start, and the magic bar charges slower than usual.

Skyrocketing rules are an interesting twist in this game. What it does is removes the mangan limits in the scoring, so that all hands are scored with the same formula. In addition to that, yakuman such as kokushi musou are changed to being worth 13 han each and nagashi mangan is counted as 20 fu 5 han. Thus, a 20+ yaku hand is actually in the realm of possibility here, unlike regular games, as regular han is added to yakuman hands.. The two stages that have this are Stone Stage of the Heavens and Twilight Bar. The first one has 5 million points. This may seem like a lot, but a yakuman ron will KO somebody immediately. The second one has everybody starting at 0 points, but nobody loses points at all. 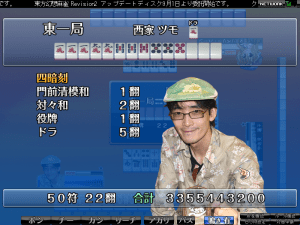 lol ZUN and skyrocketing rules. It doesn’t say so on the screenshot, but one can see that suuankou gave 13 han. 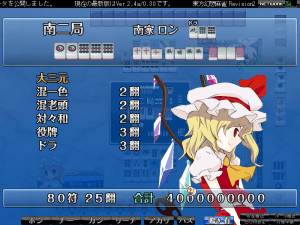 [EDIT]Now that I’ve played a bit of the multiplayer in the demo, I can now offer my opinion/whatever on it. One can create a game, listed in the lobby. The game can be passworded, of course. In the demo, you could only choose to play a 4p game, although I’m pretty sure that any stage could be chosen there. You choose the character that you want to play as in the main mulitplayer menu. I played a game between me, osamu, TRA, and a CPU. Because of A Certain Shitty Internet, every movement was pretty damn slow. The game itself was fun though, because despite playing in the heaven stage with its skyrocketing goodness, all we had was shitty hands. Abilities were used whenever the bar was full, because we couldn’t remember what character did what. Eventually, the game ended with me tsumoing for something above 7800 to win.

There is a stats page for internet playing and CPU playing. It is just a standard list of percentages, number of han that you’ve gotten, and stuff. The one interesting thing there is a list of achievements that you have gotten, such as Saturday Night Fever (playing on Saturday night). I have been told that one can choose an achievement and it’ll be below your portrait ingame or something when playing online. There’s also a spot in which you can enter whatever you feel like. 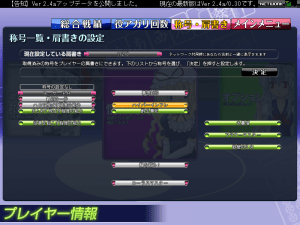 The achievements page. It’s not very useful for those who can’t read moon, but it’s nice to know that you’ve done something.

If you’re looking for specific information about a certain stage’s house rules, or whatnot, the Touhou Wiki article on this game will be your savior. Have fun playing this game for a week then letting it rot on your hard drive!