Hi. Sorry to be getting straight to the point, but let’s say that you’re the dealer in a normal round, and on the 8th turn someone declares Riichi while your hand looks like this.

The dora is 9s, and another player has already discarded one.
Even though you might be still one away, being dealer while holding two aka dora and two normal dora means that you’ll be raking in at least 12000 points if you pull it off, and so you’re looking to push back against the Riichi call.

There’s a school of thought saying that since you can’t predict the opponent’s hand, you should base your judgment on whether to push on the expected value of your own hand. But is it really impossible to know anything about the value of their Riichi hand? 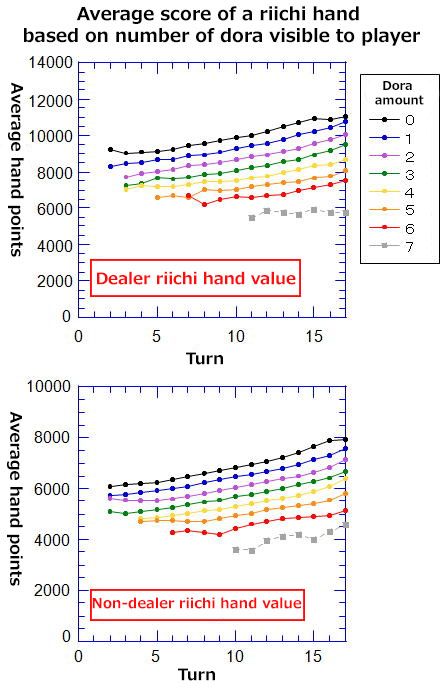 The sample data is from Tenhou Houou Paifu, with a total of 104,6221 rounds excluding those with double riichi and any kans.
We should talk about the expected value of an incoming Riichi.
According to the existing data, there is about a 75% chance of the Riichi containing at least one aka dora or dora. This makes it all the more important to be keeping track of the number of dora visible.

In a game with akadora, there are three aka dora in addition to the four normal dora.
It may seem obvious, but the more dora you can see either in your own hand or in the discards, the higher the chances are that they are not in the hands of other players. Conversely, if you’re already past midgame and you still don’t see any dora, there’s an increased risk that someone is hoarding them. It may be total common sense, but the same logic works in Riichi situations. After all, its important to have some awareness of the risk of dealing into a potentially expensive Riichi hand.

First, we introduce the average value for all Riichi hands. Based on the Houou level paifu, we can say that the average for normal cases is around 6000 points, and 8700 points for the dealer. We then added the number of dora visible to a third player as a variable. Likewise, following the graph above, you can expect the Riichi of a non-dealer to average around 6600 points if you cannot see any dora. However, if you can see already five dora in total, the average value of the Riichi drops to around 4700, a difference of almost 30%. By the way, we tried analyzing the dora separately by type of tile, but found no significant differences affecting our analysis.

However, it’s only really in cases where you have a lot of dora or other expected value that you’d want to chase after a declared Riichi. If you can see a lot of dora out, there are strategies for how you should proceed based on how many turns into the round you are.

The example may be an extreme case, but let’s look at the expected payoff of chasing as a function of both the number of tiles you are away and how far into the round you are. 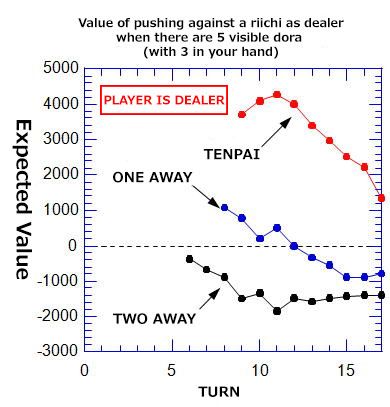 This graph illustrates the average value of chasing, given that you are the dealer chasing a non-dealer riichi, and there are either five dora visible, of which at least three dora are in your hand. It does not factor in any consideration for the kind of yaku otherwise present in the hand, but if as dealer you’re holding that many dora, there is a positive payoff to be expected from pushing even into midgame with a one-away hand. However, regardless of how many dora you may have in your hand, entering midgame still two away or more means that the odds are strongly stacked against you. That said, it’s still remarkable how big the gap is between tenpai and even one away, hmm.

Putting the one-away talk aside, I wanted to conclude by discussing how much the number of visible dora affects the expected value of a riichi hand. I think consideration of this data makes a contribution to building a more rigorous, definitive framework for deciding whether to push or fold when you’re already at tenpai.