On January 24, I had attended the first USPML event that they held in Manhattan. I had first found out about this organization from this post on MahjongNews that was linked to me on IRC. Since I live in New York, I was supposed to be a liaison or whatever between #mahjong and the USPML. When they announced their open play event, I signed up.

I had arrived late to the place, at about 3:20, due to me not seeing where I was at the subway (thanks a lot, A Cruce Victoria). Got off the train one stop too far, walked a couple of blocks, said “screw it”, and climbed into a taxi for another 10 blocks or so (I was planning to use the six dollars I spent on the taxi for dinner, but whatever). When I entered, I just kinda stood around and made small talk for a while until the games begun. After the boring stuff was over with, I sat down and begun my first game. 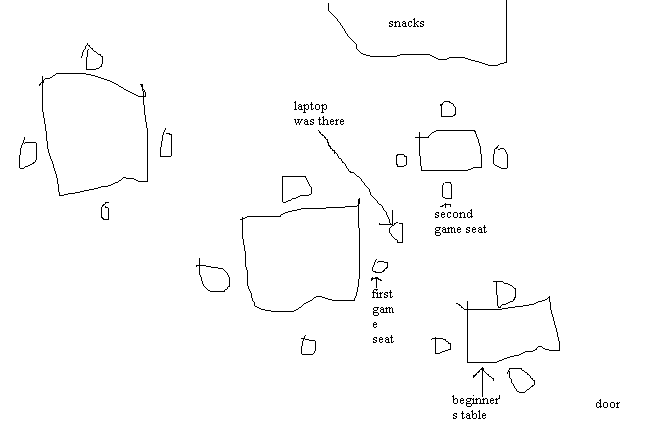 We started with a slippery set, so our hands were messing up way too much. It was replaced with a new set that felt much better. I don’t remember much of what happened in the game, although there were a few events that stuck in my mind. First round, east won a mangan off west. Second (or third), west ended up with a furiten chombo with chitoitsu. In one round, I made a kan and flipped the dora indicator that turned my kan tiles into 4 dora. However, that round misfired and I dealt into a non-dealer mangan when reaching tenpai. Eventually, I was 3rd with 20100 points (last was 20000, don’t remember 1st and 2nd scores). The entire game was basically who can get some kind of han so that they can legally win (toi toi and/or tanyaos). Every winning hand was open as well as much of the non winning hands.

We were supposed to have one hanchan before stopping for snacks, but only managed to go through the east round. I felt that the reason was because the other players were way slower than me, but perhaps I’ve been away from playing real life mahjong for too long. Some people went out for a snack run, and when they came back, most of us ended up watching the last game go through South 4 while eating chips. Although I brought my laptop because Osamu and co wanted me to do a live blag or whatever, the wifi was dropping all the time, so I just gave up at this point.

For the 2nd game, I switched my seat to another table. This hanchan (that managed to become east only as well because everybody else played slower than me) was completely different than my first game, as people actually usually kept their hands closed. There were five to seven riichis in the game, and two or three were from me (so I have a bad memory, sue me). I chombo’d an open sanshoku dora hand, because I was way too nervous and said (more like shouted) ron before I said to myself that just because it had green on it on the quarter of the tile that I saw didn’t mean that it was my winning tile. My wait was 58s and the tile was 9s. I got back my points with riichis and tanyaos. East 4 was the most memorable one for me, in which I ron’d for riichi and dora 1, and came in second place. However, I forgot to flip for uradora until the scores were recorded and we were getting up. As you may have guessed, I got one uradora and bumped my hand from 2600 to 5200, which meant that I was knocked up to first place (I don’t remember exact scores for this game either, although I’m fairly certain that I was at 34#00).

The end was the usual stuff, thanks for coming, etc. Various mahjong goods that I noticed were in the room included mahjong related magazines, a volume of some Fukumoto mango (Ten perhaps), a ruler with kokushi musou, a sanma mahjong set from Hiroshima and other stuff that I forgot about. Overall, I had a nice time and it was worth the time and money I spent that day.