Woa, I intended to make this post ages ago. Unfortunately my computer broke and then I got lazy. But yeah, we do plan to continue this feature at somewhat regular intervals.

And in case you’re wondering, this is exactly the kind of valueless content a previous post was criticizing. The distinction here is that this material is screened to be “valueless but amusing”. I mean, are there a lot of people who want to hear a report of a suicide in China where it’s mentioned the guy had a family member who played Mahjong? Probably not. Would people get a kick out of hearing someone made a body pillow designed after former Ukrainian PM Julia Timoshenko’s appearance in Mudazumo? You bet!

Yeah, we sure are classy. :V

So back when I originally meant to make this post, Tenhou had just reached one million registered IDs. Time for a belated celebration!

…And there was much rejoicing.

One month later, there are roughly 50000 new IDs registered. Now taking bets on how long until 2 million!

What Do You Want On Your Tombstone?

Awesome dudes like Akagi get cigarettes and energy drinks. A cat is fine too.

Shoutout to Deniz from Turkey for the gutsy pose. The Japanese didn’t know what to think.

The Legendary Player Who Got Two Tenhou In One Night 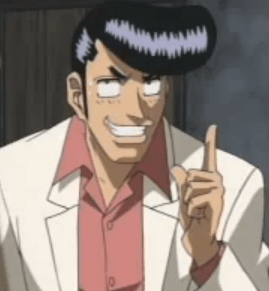 Osamu discovered a fan site for a Mahjong player known as NISHI, who’s known for such exploits as getting multiple Tenhous and getting a Ryuukyoku after a double riichi with a 5-sided wait.

Osamu’s now wondering when someone will make a fanpage about his mahjong exploits. Sorry Osamu, but I don’t think dealing in to tenhous is quite the same. :<

Tenhou’s Jansou Mode, originally planned to go live in September, seems to have been delayed another month. However it does appear in the client and most of the rules have been laid out.

All games are kuitan ari with red tiles. That means instead of selecting a queue based on game rules, you’ll be choosing a Shuugi value (0, 2000, or 5000).

There’s also no more “slow” and “fast” queue. All tonpuusen use the fast turn timer, while tonnansen use the normal timer. The overtime West round is removed, and the honba value in tonpuusens is increased from 300 to 1500.