After buying my briefcase MJ set and playing riichi, I was pumped to teach newbies the skilled game of Mahjong on Saturday. Had a good handful of students this time. So silly of me to get there early and set up. My students were sat sipping tea and coffee upstairs! Obviously we would be downstairs. There are square tables down there. Haha.

Some of my new students took to the concept really quickly. Others were still struggling with the concept of deciding the wall and breaking the wall after the dice were thrown. I should print this on beer coasters or something. (www.sloperama.com/images/dealing3.gif))  Here is where it gets really stressful for some of them. Collecting your tiles in your play order (anti-clockwise), and removing the tiles from the wall (clockwise manner). I tried the old ‘Karate Kid’ metaphor of ‘Wax on, Wax off’. With ‘Wax off’ being your right hand, you’re moving your right hand in a clockwise manner, removing the tiles in that manner. Fail. Why? Students are so tempted to take from the dead wall when it’s infront of them! I’m sure everyone had this when they were learning the game. I’d rather not put a marker there and get them to learn to take the tiles in a clockwise manner instead. (I’m teaching Chinese/Hong Kong Mahjong, so that’s why there’s no dora tile revealed, which would make it easier to determine which wall to take from.)

I introduced the concept of ‘kong’ (槓 kan), telling them the three possible ways to do so. The advantages; change the play order, get a tile from the dead wall, (reveal a kan dora). I told them as well, that if you already have your triple, you should keep it and use the fourth tile in a sequence, if possible, if you picked up the fourth tile yourself. Or, depending on your hand, even discard the fourth tile.

Also tried to introduce the concept of round wind and seated wind. They seemed pretty alert to that. I’ll test them next week though! What seat are you in right now? Brown chair? Wrong. Fail! J/k. The fact that if you have a triple set of your seated wind and that it’s worth a bonus point.

I was asked at the end if I had taught them all the rules for Mahjong. I would say I have. I left out scoring for now, and let them win with one point (no yaku) as you need that at the beginning to become familiar with what you need to create your mahjong hand. So, I said that I’ve left out the scoring system and the ‘special’ hands for now. They’re still making a few mistakes here and there. Calling pong when they actually have won. Calling pong when you don’t have to. Calling chi when they see their tile discarded from the right or opposite player.

When they get the calls and play order more familiar to them, then I’ll introduce the scoring system. I think that’s only fair. Desho? They also need to learn how to build their wall quicker. I tried to introduce the concept of 6 rows of 6 tiles. (18 tiles per wall in Chinese MJ because we use 4 flower and 4 season tiles, adding two to each wall) And I also tried to speed up their gameplay by having them take from the wall, discard, then place that tile in their hand. Also after calling chi or pong, to immediately discard, then take the tile they called, open it, push the three tiles to the side. What p!ssed me off is I brought the set I had bought (weighs near enough 5kg) and we didn’t even use it! Anyway, the ‘Majong Map’ turned out to be useful. 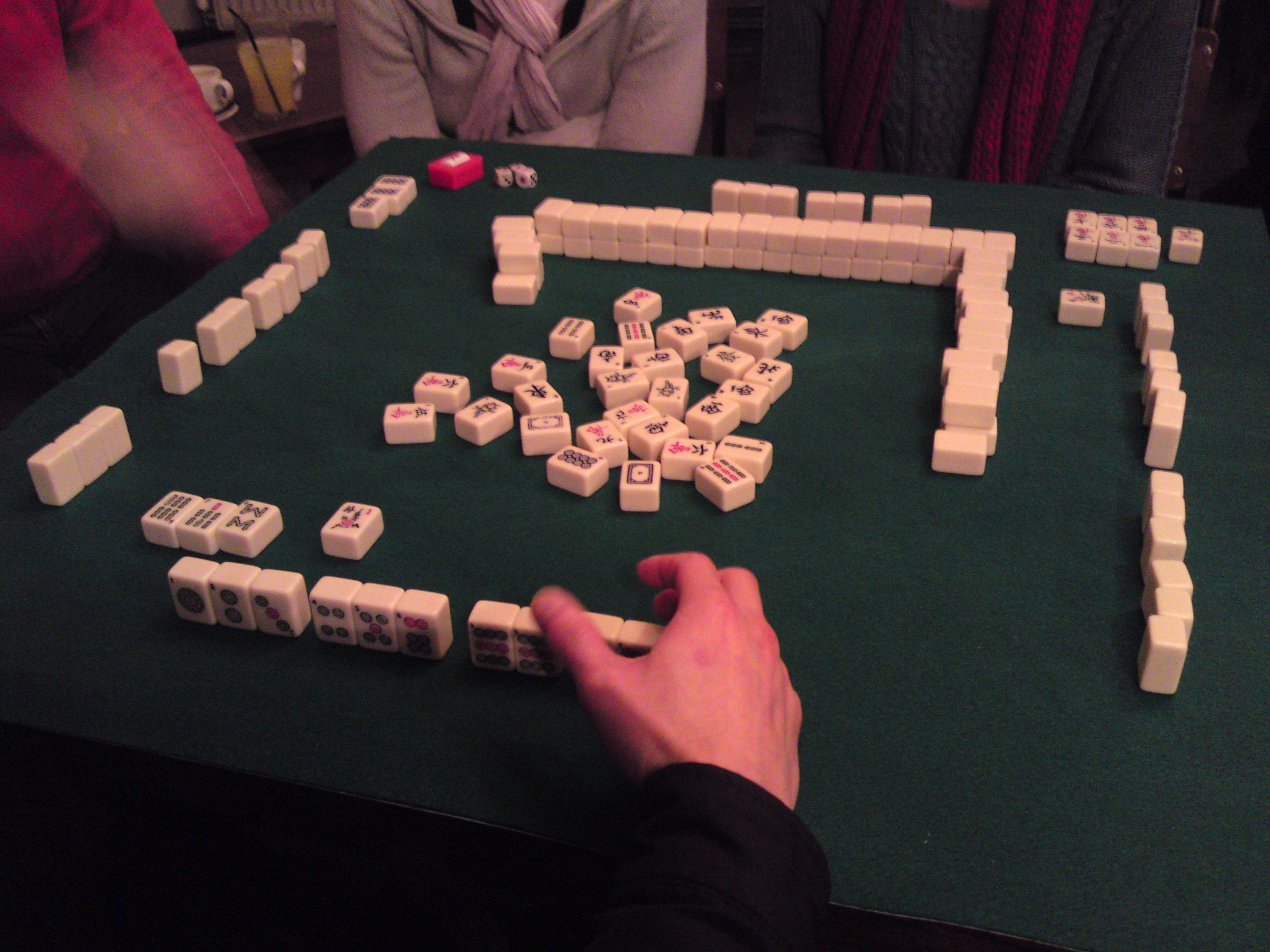 Play quickly!
As an aside, we went to eat Thai food at ‘Busaba’ after. Can you think of any other Thai food chains/franchises besides Busaba? There used to be one called ‘Tuk Tuk’, but that died in 2011. Pad thai ftw. Busty Thais too, but you can’t eat those. Hee.