Hey, this is UmaiKeiki, a very lazy mahjong player — although I’m often in the company of some real addicts. They’ve scoured the internet for anything and everything related to Mahjong, and found some really outrageous ideas. Are the tiles given by Tenhou really random? Is a hanchan really the same length as two tonpuusen? Questions like these, while not exactly about “luck” and the “flow of the game”, are a bit reminiscent of “occult” Mahjong, which is essentially the belief that random events in Mahjong are not really random.

Now there’s nothing terribly wrong with Occult Mahjong in that it can be a convenient way to explain away some minor issues — such as that awful losing streak you just had, or some secret technique you don’t want to share with everyone. However, it sure would be fun to test some of these claims against the mathematics of probability and statistics! Today we shall do exactly this, and see how well they stand up.

Was that ippatsu tsumo your opponent just got really due to chance, or did the game rearrange the tiles to give it to him on purpose? Does Tenhou intentionally give you extra character tiles in your starting hand? The answer is no, such things don’t happen on Tenhou. According to the manual page, the walls are arranged randomly before the start of every game (random number generator / seed and wall generation). The walls are generated by Mersenne twister and can be recreated from the seed given in every game log, which looks something like this:

In the past you could get the seed by observing your own games, and thus predict what everybody would draw. Fortunately Tenhou fixed that bug, but it proves tile order in the walls doesn’t change during the game.

One specific complaint I heard was that starting hands can contain 4-6 character tiles, which can be a significant slowdown when going for Pinfu. How many character tiles SHOULD you get in the beginning? A basic, if flawed, calculation might look like this:

Now to see what the statistics say. I tallied how often starting hands had each number of character tiles for a large number of games, and here are the results:

We can see that it is most common to start with 2-3 character tiles in the hand. The average turned out to be 2.569. The feeling that you start with 4-6 all the time can possibly be explained that such hands are more memorable because of the added frustration. By the way, the probability of starting with 4 or more character tiles seems to be 26.425%, so it will probably happen at least once per game.

If this talk of games fudging the draws sounds like a complete joke to you, be aware that major poker sites are notorious for doing this as it makes them a LOT more revenue. The idea is to give everyone a big hand at the same time so they are more likely to push all in. I wouldn’t put it past any gambling site to do something like this, even Mahjong sites, so… (insert obligatory disclaimer to be wary of paysites)

Here’s an interesting one. A Tonpuusen is a game consisting of East 1st through 4th rounds. A Hanchan has East 1st-4th and South 1st-4th. So, by default, a Hanchan has exactly twice the number of hands as a Tonpuusen. What, then, would cause someone to regard a hanchan as longer than that? The answer: Ren Chans. Since a hanchan has more rounds, there are more opportunities for a renchan to occur. Of course, if you look at many games over time, the average number of renchans in a hanchan would turn out to be twice the average in a tonpuusen. Or would it? Let’s look at a large number of games and find out! 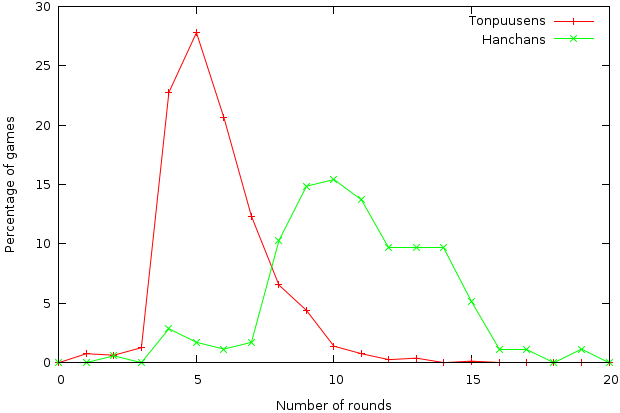 The average number of rounds per game were as follows:

From this data we can see that there isn’t much difference between one hanchan and two tonpuusen. One interesting observation is that while hanchan are more likely to have renchan, they are also more likely to end early because someone busted out!

Of course, this says nothing of player mentality when sitting down for a game. Since a hanchan is a “normal” game, someone joining a tonpuusen would be more interested in getting the game over with as fast as possible. Thus, the players might play for speed instead of strategy in order to end a tonpuusen quickly.

Is The Suit Of The Riichi Tile Significant?

I heard a rumour that the tile discarded after a Riichi declaration can be used to guess which suit contains the waits. Well, sure, in combination with the other discards, you can probably figure it out. But here’s a question: given only the tile discarded immediately after a Riichi declaration, can you ignore all other discards and identify a suit that’s more safe or dangerous than another? Here’s what the statistics say:

So you should have a 1 in 3 chance of there being a wait in the same suit as the Riichi tile. And that’s exactly how it should be, since there are 3 suits. But is there any difference in early or late game? Let’s look at the turn number when the Riichis were made:

Both seem to follow the same curve. From this, I would conclude that turn number does not affect whether a riichi tile indicates nearby safe or dangerous tiles. This doesn’t mean you should start ignoring the riichi tile completely, though. Late game discards from the hand can often tell you what tiles that player considered important enough to keep when close to tenpai.

Have fun, and I wish you… statistically favourable odds.