Going to unhide all the Flavor of the Month posts, but still gonna tag the title just in case you only want to know about mahjongs and nothing else.

I’ve been meaning to write about this awesome game for some time but kept putting it off, partly because I keep struggling for words to describe it adequately. It’s a sort of double-blind turn-based pokemon battle with collectible cards… well, at least I tried. It was designed by David Sirlin, and if that name sounds familiar it is because he is the author of some compulsory reading in Internet 101.

Basically you start with a ‘deck’ of 3 characters, each equipped with an item of your choice, against your opponents deck. One character is on the playing field at a time, and may use attacks consuming differing amounts of energy, which recharges every turn. Characters may switch in and out of battle to dodge attacks while bringing in reinforcements, and each move (and its never-certain outcome) can swing the battle either way. The character cards are nicely themed and flavorful, for what it’s worth, and the balance in the game makes it truly solid. Read the forum and you will find loads of people ranting against the RNG, which is kind of silly because I thought that was one of the neatest touches to the game, since everyone gets their share of really horrific bad beats, each one rantworthy in itself.

Where the game really shines is that basically as long as you can read your opponent’s mind and predict which button he is going to hit this turn, you can more or less dance around his attacks while routing him in humiliating fashion. I generally do quite well playing entirely inside my opponents heads, ignoring the logical part of my brain. When done right it’s exhilarating beyond belief. When it goes bad I check back and can’t believe I did that dumbass shit what the fuck was I thinking. As I’ve always said, it’s a game that either makes you feel really smart or really stupid.

The interface is simple and clean, and another thing I love about it is all the information you will need is displayed right there, so all you have to be worried about is making the correct decision. 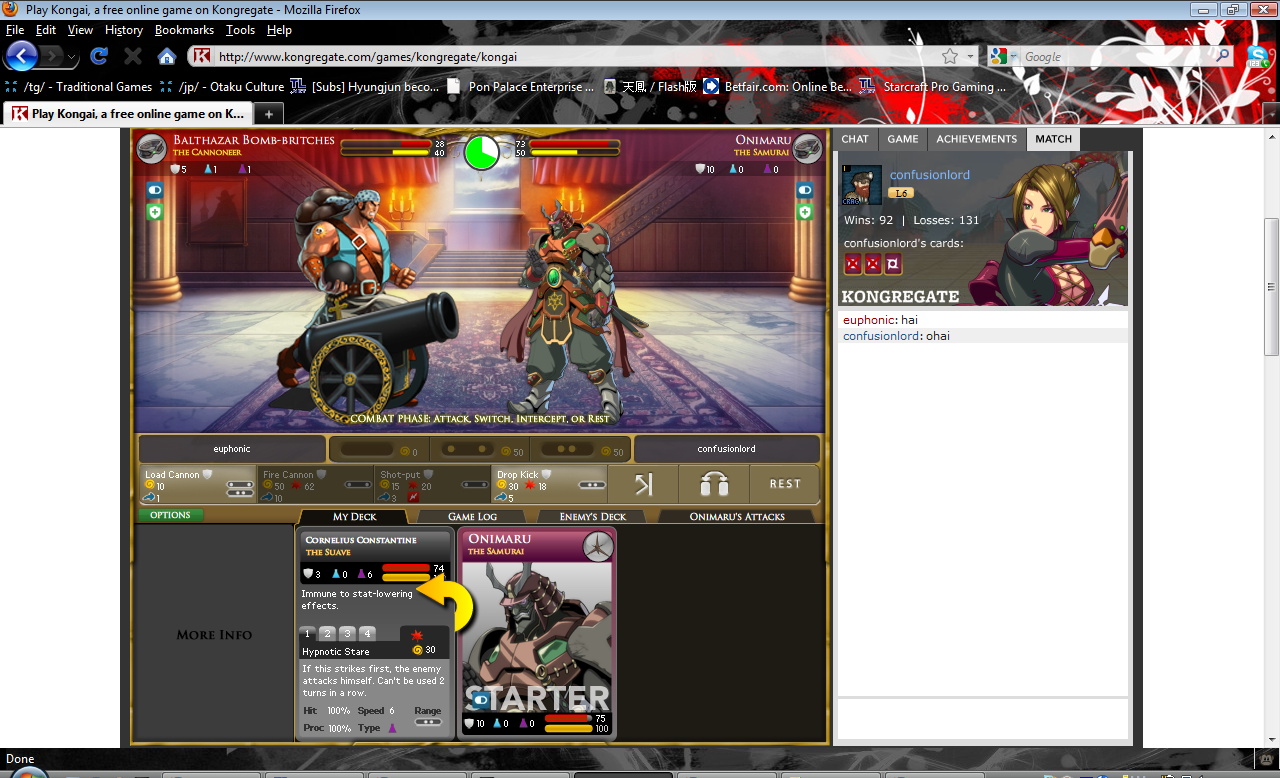 All the info is in nice little tabs. Little icons along the side show relevant status effects, etc.

Unfortunately his dudes are all dead, but otherwise the cards are all flippable to show all relevant information you’ll need to make your choice.

The game has a sort of player rank matchmaking system. I rarely play a lot of ranked games, and at the lower levels it’s mostly trying to find out exactly how dumb your opponent is, like Poe’s schoolboy who won all the marbles in his school. The different choices beat each other in a rock-paper-scissors fashion a lot of the time, but there’s always more than enough time to slowly figure it out.

You earn cards by a low chance random drop while playing, or by achieving some level in the various flash games on site. You can also buy the cards outright, which is nice but not really necessary. Many collectible card games, online and otherwise, will swear that their stuff is perfectly balanced, and spending money only expands your options to better suit your playstyle and creativity. This is always pure bunkum. In this case however, it is almost perfectly true. I have yet to spend a cent, and have enjoyed every hour wasted on it. If you like mind-readan games, rate a zero on reflexes, or just want to feel superior to some 10-year-old kid on the internet, there’s no reason to not check this out.

A useful wiki is http://kongregate.wikia.com/wiki/Kongai

I played Benjamin a couple of times last year and found out I am roughly 20 times better at this game than him. If you do play and are interested in a game or five let me know.