If you have never played online before or don't really know what to expect, I recommend skipping on to Part 3 and coming back later for the lecture.

Now that we've gotten the rules out of the way, I want to give a brief idea of the stuff you will pick up, sooner or later. Don't think of these as super mahjong tips or anything, I could throw out a bunch of random one-liners you have to follow without any context, but they would be worthless to you. In mahjong, context is everything. A play that looks utterly retarded in one situation may be perfectly acceptable in another.

Here we've laid out the general guidelines for stuff that you will find yourself picking up as your experience in actual play grows. After you have more or less figured it out, mahjong becomes such an unconscious game that you can play it in your sleep. For people who care about improving their skills, this is actually a problem because it's hard to learn anything when just playing on autopilot. Try to force yourself out of the heat of the gamble or the mechanical torpor, and take some time to rethink each decision you make.

Here are some of the concepts you should keep in mind, with explanations by some of our team. Although all of the ideas are interconnected, I've split them into little sections so they look less intimidating. Some examples and comparisons are included, and I've made them painfully extreme rather than marginal to drive in my points though dramatic contrast. Most of the time you'll be faced with less clear-cut decisions, but as long as you can follow the reasoning behind the examples, you should be able to make the right call. And don't worry too much about the small things - if it looks marginal, it probably is.

Sorry for it looking really bad, but a lot of these are badly-written, and the tone is jumping about all over the place, as it consists of people patching in various paragraphs haphazardly. If you look carefully, you'll be able to notice where a new writer makes a dynamic entry. I'll be revising them 20 or 50 times once I feel up to it.

It's best to make a plan early in the hand. Keep in mind what yaku combinations are possible, and which are most likely. Do you see yourself folding it to a riichi? Is there any way you can speed it up?

It's a given that

next, if you draw a tile that sticks) is going. You have at least a 3 han hand, however other than pinfu, riichi, drawing a second

or a red five, it's unlikely you will pick up one more han. One good thing about it is it looks pretty much set up for a bread-and-butter open tan yao. When making those you would hate tiles like 78, near the edge where drawing a terminal is the worst thing that can happen. There's thankfully nothing of the sort here. If I don't get some big draws very early I'll probably start to call tiles like crazy to catch up.

This is exactly the same number of tiles away from tenpai as the previous hand. However here, dealing any of the yakuhai early would be a mistake. This is a far heavier hand, and a yakuhai pon is a necessity if you want it to get off the ground in a hurry.

Even for an absolute beginner, tile efficiency is one of the easiest skills to explain and master. It's way more important in Japanese mahjong than other variants, because of the strong emphasis on keeping a hand closed whenever possible.

It's a common mistake, however, to assume your melds will be filled in sooner or later, and work on clearing out unrelated stragglers in your hand prematurely. There's also the newbie's bane of keeping too many pairs in a closed hand, which dramatically reduces the chances you'll draw the last few tiles you need. [examples later]

If I wrote a book on defense for beginners, about 90% of it would be on why you should defend, and why it's important, and why you need to do it. And maybe 10% about the how-to, but that's seriously overrated and beaten to death. Just deal tiles passed after a riichi, deal safe tiles other people do, if you are pressed for safe tiles you can resort to the 1-4-7 thing but don't put too much reliance on it.

In the beginning of your defense training or whatever, it is probably very crucial to make up your mind if you are going to defend or keep going. Don't be half-assed about it, don't be like "OK, I'll deal that tile which appears a bit less dangerous in order to still keep a chance of winning", unless it is either blatantly obvious (and I mean really obvious), you are in for a yakuman, or last in orasu without a chance of getting out of 4th place else. Consider thoroughly if you decide to defend or not.

Trying to keep the balance between defending and attacking with a kind of half-assed play style (known as mawashiuchi 回し打ち) is something you should only do in rare cases or if you have much experience defending and know the whole table situation really well.

Most of the hands that you will ever play, you will not win. Dealing into a hand when you don't want to is way easier than you might think. Defense not-loses you points, which is practically the same as gaining them. It solidifies leads and mitigates deficits.

Instead of droning on and on about the more practical aspects of playing mahjong, we've done a bunch of playthroughs, so I can devote more virtual ink to the more theoretical stuff, about looking beyond your tiles. Defense definitely falls into this category, so for the next few pages you'll be seeing quite a bit of it.

Sooner or later you will discover that good situational play in mahjong is about valuing things differently depending on the situation at hand. It doesn't take a genius to make the decisions that will gain you the most points. If you can find a tile to cut that satisfies all the one-liner maxims espoused in any English mahjong column, do you know what it's called? A no-brainer. You won't win any awards for cutting irrelevant winds from an opening hand, even though everyone would agree it's the best move by far. The interesting parts of the game are the tough decisions when the chips are down, or in a desperate placing race with all the scores close together.

In mahjong as well as life, sometimes you can't have it all. You'll constantly find yourself trying to make compromises between tile efficiency, potential score, placing, risk, and ultimately your chances of winning. What is important is keeping in mind that many values are relative. Unless you are in a cumulative score tournament, leading with 20000 points in all last doesn't mean you have to riichi to win harder. When you are behind 3rd place by only 500 points, forming a yakuman will have to take a back seat to some desperate, gritty scrabbling.

Also if you haven't thought about it, every time you deal a tile, you are losing in several parallel universes where the mathematically 'wrong' tiles come in. When you keep a

wait, one time in three you will draw the

and rage. Every time you cut those tiles you are essentially making a decision to lose 1/3 of those games if it means you will win the rest. Because you can't win them all. I'm one of those players that will do anything to keep hope alive, a great spirit to have in casual games, but in rank grinding you have to appreciate that all players are just looking out for themselves, and that's even assuming they care at all. Just accept that you are predestined to lose some games, but you often have a say in how bad the loss is. Game results like 14124413 aren't really that impressive, and there is a reason why placing average/rating is usually the skill indicator of choice.

When you play a hand, the ultimate objective should be to improve (or at least not worsen) your placing among the other 3 players. I'll say it again, you are playing for placing, not points. Good play is geared to placing as high as you can, not scoring a bajillion points, which are just a means to an end.

Mahjong players are not idiots. Well, not always. I do believe that if you observe all four sides of a game, you will find all four players are making largely reasonable decisions. I remember moaning about losing a game, and Alvin professing astonishment that I did not have overwhelmingly crushing chances of victory versus three random guys in a four-hand match. In his defense, he doesn't play much, but I found it amusing that he would imagine any other player would just spew tiles and points in my direction like some kind of Japanese pinata.

Here's an example that ties some of the above points together. This is a screenshot taken from one of puyo's games. 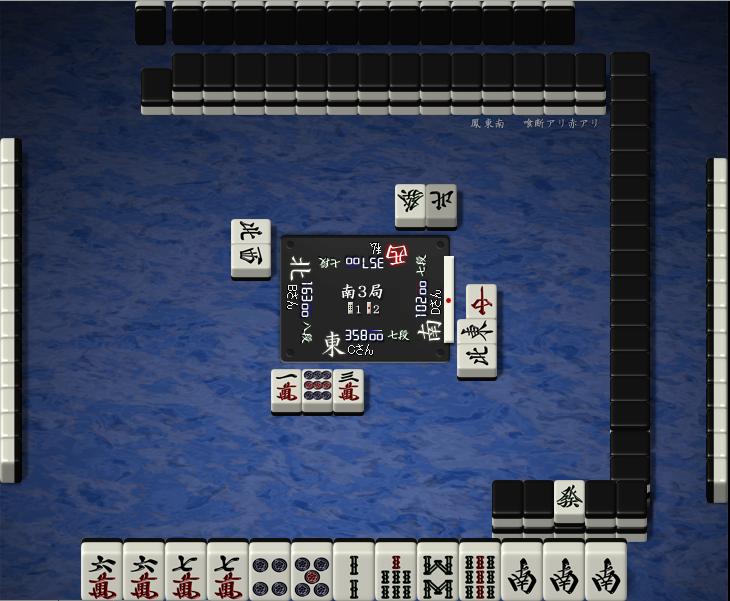 Even without looking at the subsequent action I would recommend going ahead with the hand. The threat here is Player D getting a tsumo, which will knock you out of first place, going into the last hand. Seeing as the player in second by 100 points knows this, he has virtually no reason to gamble on making a hand, since it pretty much accomplishes the same objective with zero risk. You have an extremely workable hand, and winning a small hand here would give you a nice buffer to pay a no-ten penalty or absorb a mangan tsumo next hand, and still make it into all last as leader. This will put all the pressure on the player in second to come up with something instead of yourself.

Sometimes I feel it's so easy to forget about your opponents, especially in 3-player mahjong, where tsumos are sometimes just not enough to cut it. Even when way behind, some people riichi and expect me to deal in for no reason. Oftentimes even at the higher levels of play it's just as simple as glancing at their point total and imagining what you would do in that position. It's more prisoner's dilemma than five-pirates-voting-to-split-the-treasure tier where difficulty is concerned.