The Slowpoke Express has just arrived bearing news – the 1st BakaBT Mahjong Tournament is a go.

As the participants have just been sorted into groups, the tournament kicks off with a league format, probably with a cutoff into further rounds. We’re still rather unclear about the particulars. The tournament organizers should have their hands full handling game reports and matching up the 98 participants confirmed thus far, as almost all of them can only play at 5pm on odd-numbered Tuesdays in their respective time zones. BakaBT has always had one of the more active anime-based communities for as long as I can remember, so it’s no surprise that the signup thread had almost 100 posts within a few days before it was slammed shut in a panic. We shall see who among the pantsu pundits shall prevail against their peers.

After a brief respite for planning, the group list for the league stages has just been posted on the tournament board, which I’ve helpfully screenshotted here to pad out this post. 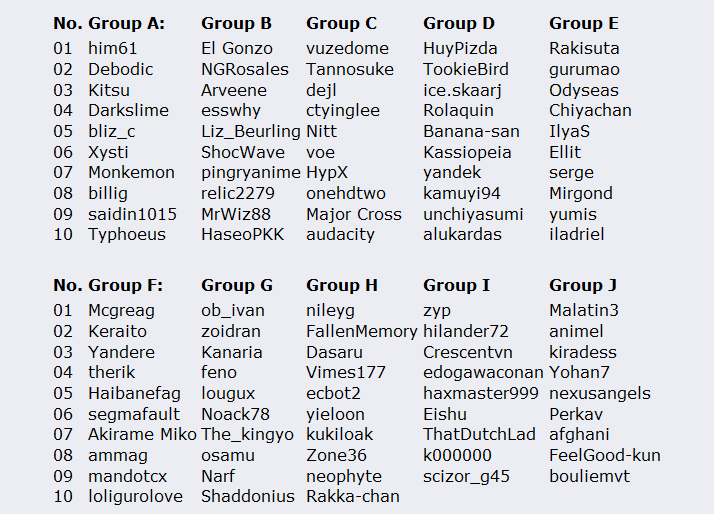 Thing is, I’m not really a forum kind of guy, so you’ll forgive me for not being able to point out any prominent posters. I expect we’ll be able to provide better coverage once the tournament is under way, after access to replays and results. Quite a few participants are claiming to be mahjong beginners, but we’ll be able to see who stands out after a few rounds. Some major thrills and spills are to be expected before the dust settles on the winners.

Update: After 10 minutes’ scrutiny of the signup thread, I’ve managed to identify a couple of the usual suspects, along with a certain someone hiding in plain sight.

Being drawn in a group along with any of the moderators should be a challenging prospect, especially since everyone’s powerlevels are still well-hidden. If anyone cares to chip in with a brief intro of yourself, we’ll cheer you on in the league stages and follow your progress with interest once you get seeded in from the group stages. Dohoho.