The Austrian Open Riichi Tournament is a riichi mahjong event that takes place in Vienna, Austria (doh). This year it was the third time the KASU club organised it with great success – it was the first time it filled up all 32 available seats. Me and my fellow mahjong players from neighbouring Slovakia have had it in sight for some time, and decided to take part. From 32 participants, we took 7 seats, which made us the second largest country by attendance (nothing special, with only 2 other people from some other country – Britain’s Gemma Collinge and Italy’s Paolo Silvestri).

It was a first time for all of us to attend a mahjong tournament. We regularly meet and play together, but it really doesn’t compare to this. We also play using a bit different rules (open tanyao, classical scoring etc.), so we had to adapt our style of play to these circumstances. I’ll try to describe the tournament as we saw it, with emphasis on how I played. Prepare for a wall of text. 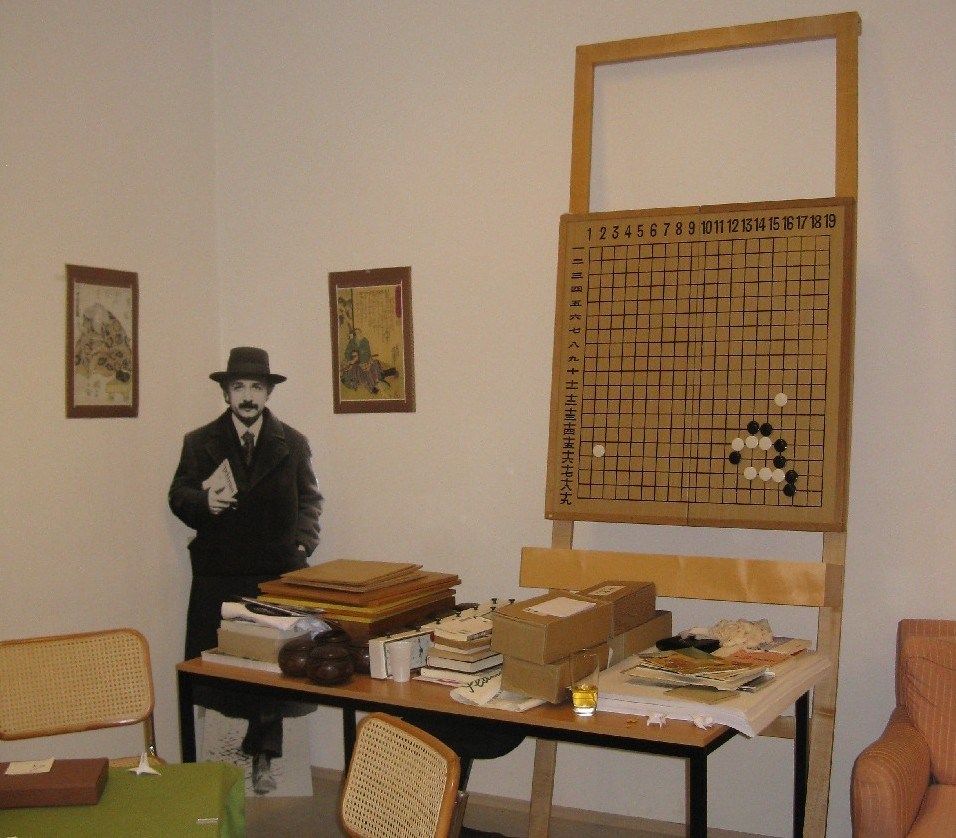 Talking about open tanyao is like beating a dead horse, so I won’t go there. But what made me a bit uncomfortable were the scoring rules applied in the games. Every hanchan all players start at 0 points. You play and win / lose as usual, but going under 0 doesn’t end the game. You play till the end of the hanchan, or till 90 minutes pass. After four hanchans at the end of the day, your score gets counted (with uma applied – the fourth player pays the first player 9000 and the third player pays the second one 3000) and the player with the highest score wins. This of course rules out using the scoring sticks, and all scores were written on a piece of paper during the play – not really fun.

What does this mean for playing? I pondered that the best bet would be to get high valued hands, so you can accumulate a lot of points. Since the winners had over 90k points at the end, some smaller 10-20k wins wouldn’t be enough, even if you finished first in all hanchans. But one needs to put them together fast – especially against the better players, who are damn quick. On one hand it opens some chances for tactical thinking, but on the other hand it removes the other aspects of standard riichi. But in the end, it was pretty fun to see some of the monster wins that a few players managed to pull off (including me).

Upon arrival to the venue of the Go7 club, located on the famous Mariahilferstrasse, we got greeted by the friendly local folk. There were 8 tables to play on (32 / 4 of course) plus tables with water, tea, juice and other stuff. We registered, got our numbers and checked out our seating order. First hanchan was funny for four of us, since they registered after each other and ended up playing at the same table. 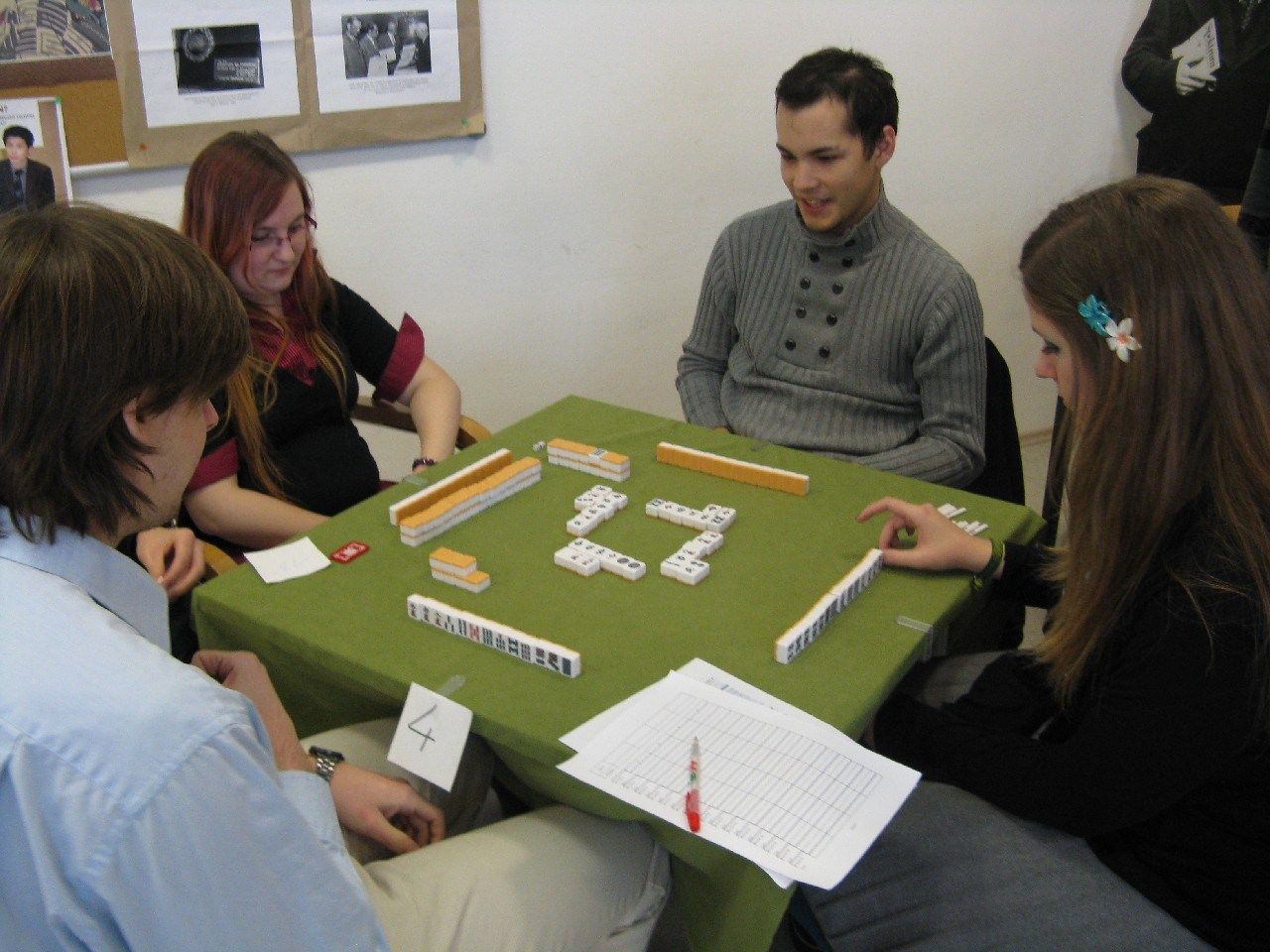 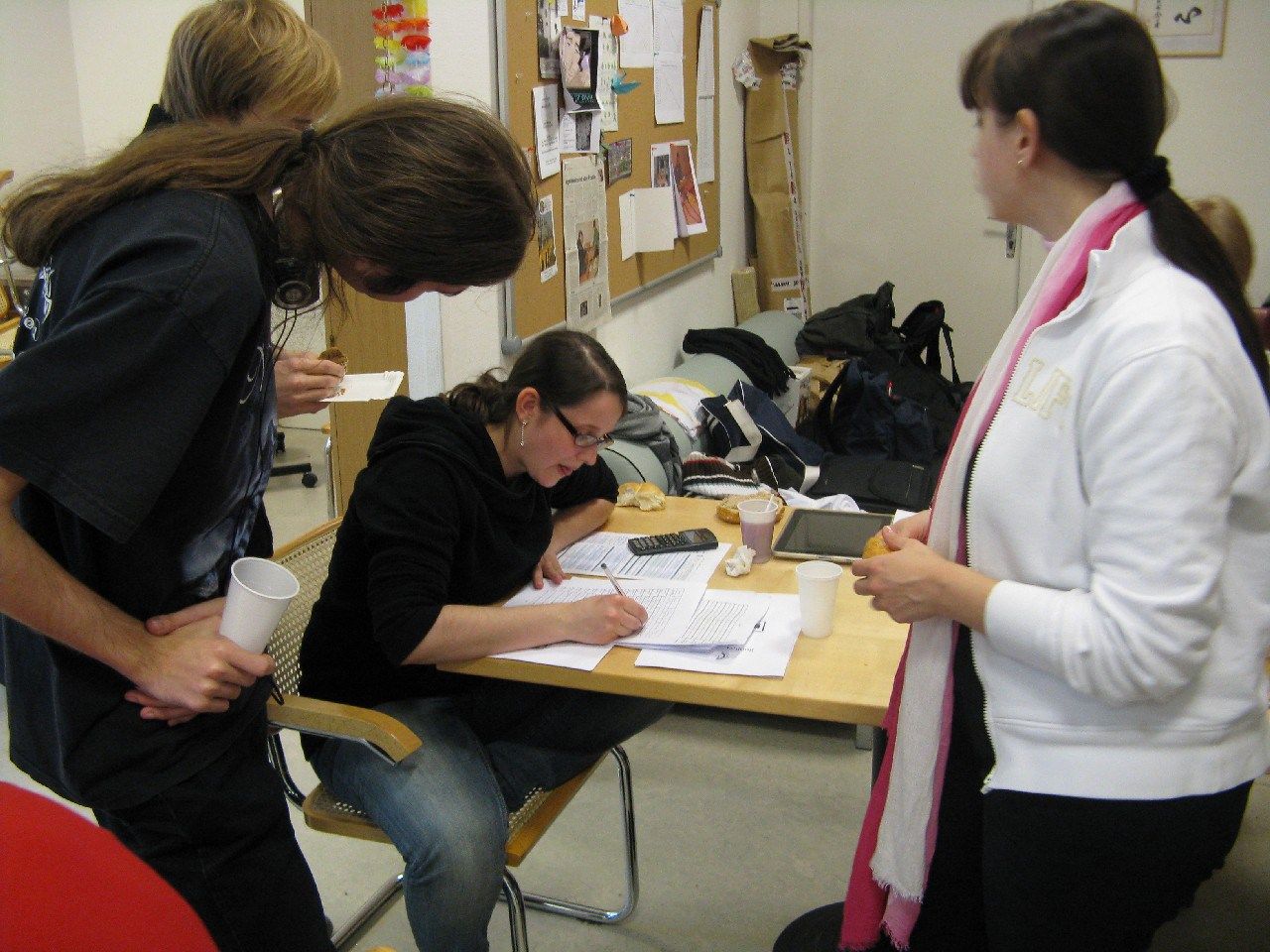 After remembering my first hanchan, I have to laugh a bit, because the 3 tournament winners were sitting at that table. It was tight, lots of ryuukyoku and riichi sticks in pot. Unfortunately I had a bad run, dealt in twice into 2 / 3 han hands and got tsumoed / 3k noten’d all the time. That brought me into fourth place with a -20k final score. Not a positive start. Anyway, I didn’t let my spirit go down, since my mates started off really well – one of them got to 1. overall place after the first hanchan.

We got some sausages, bread and cakes for lunch, had a break and discussed our further progress / aspirations. We could already see that it’s not that bad and we can play on par with the players there. At 13:00, the second hanchan began.

In the second hanchan, my play improved a bit. It was still very balanced, the guys at my table (including Paolo Silvestri from Italy, who was an older guy with different mahjong roots, but still a very calm and good style) were playing pretty well. I even tried a kokushi, got to 2-shanten pretty fast, but alas it didn’t work out. In the end I won the table, after a lucky houtei dealer’s mangan. The win was very small though, and didn’t even erase my minus points. But I still got a pretty good feeling from the game and was looking forward to the next one. Also, another one of my friends, Juraj Jerguš, got the lead this time, winning a table with +50900 points. 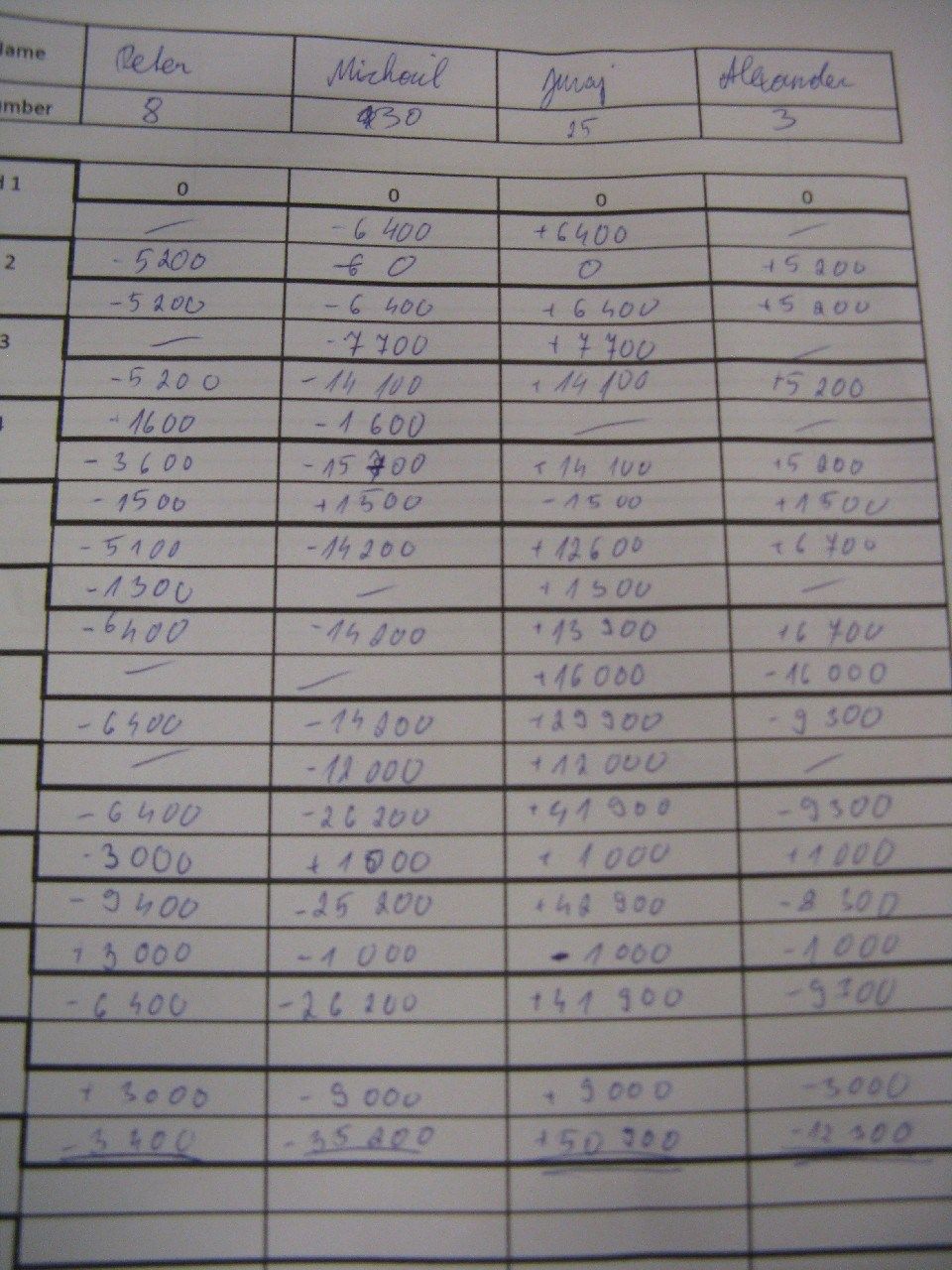 Third hanchan? I think I liked this one the best. And not just because Botond Kis was singing Look at my horse. I have no idea what the tiles were thinking at the time, but they just jumped into my hand so nicely. Riichi pinfu all the time, with unreadable discards, which left my opponents totally clueless and in defense. I won the table without any problems, which catapulted me to 10th place overall. I was pretty happy, but the leader of the previous round was not. He got a table with Alexander Doppelhofer and Chang Xue, where he only sat and observed their tsumo-fest. During this hanchan someone also scored a double yakuman (allegedly, nobody from us saw it, but it was some variation on daisangen).

It was already dark outside when the final hanchan of the tournament began. Everyone was pretty tired at this point and it could be seen in their expressions and playing. I got Chang Xue, Lena Weinguny and my Slovakian mate, the first round leader, Michal Marko as my final opponents. From what I knew about the two Austrians, I had my doubts about this game. They played fast, precise, good defense and offense. But once again, the tiles smiled. I don’t know how those san-shoku came all the time. I didn’t riichi much in this game, seeing that defending is not a problem for these players, and I got a few small damaten rons, but also 4-40 / 4-30 hands. We got to south 4 very fast, still having around 30 minutes till the end. I was the final dealer, in the lead, and I could’ve ended the game if I threw away my tenpai. But I didn’t, I don’t know why, it just didn’t cross my mind. I just kept getting renchan. On the 3rd one, I think I wasted my luck for the next 100 years with tsumoing a kanchan hell wait on a dora (with the other three of them in my pon), with a dealer’s baiman (thanks to Michal, who kanned 2 times to go for a rinshan suu-ankou, opening 4 more dora for me). In the 5th renchan, Chang finally ronned Lena, which ended the game after the 90 minute limit.

This last win gave me 72k points and it started to look I could place in the top 3. We didn’t know how well Birgitt Rupp played (the current leader after 3rd hanchan) – we only knew she won her table too. Yeah, we could’ve asked around, but we’re all antisocial and can’t speak much german. Still, the award ceremony came (~1 hour earlier than planned). They went through all 32 participants, gave out diplomas and handshakes, plus special prizes for the top 3 and the 31st place (some strange Japanese custom). All in all, I won, Birgitt Rupp was second and my mate Tomáš Široň ended third. We got awesome glasses with engraved symbols – 2 glasses with Rii-chi Mah-jong for the 3rd place, 3 glasses with the dragons for 2nd place and four glasses with the winds for the 1st place.

So, what have we learned today? Clearly, playing a tournament can turn many ways. Even newcomers can have a good day and surprise. Sometimes I just made really bad decisions in my games and I have no idea why haven’t I been punished for them. Another thing we learned was that playing online really helps – from 7 of us, the 3 guys that ended in top10 are all active tenhou.net players, while the other 4 are not playing online at all or just once in a while. It mostly helps with speed – some of our non-tenhou players had a feeling that everything was really really fast and they had no time to think. It was a bit true, while the Austrians really did play nice and fast, but for a trained tenhou fast mode player it was nothing to sweat about. Also, dora and red dora are priceless, especially in a tournament where score matters the most. And finally, having fun is the most important factor. When you get stressed, your decisions can destroy everything. 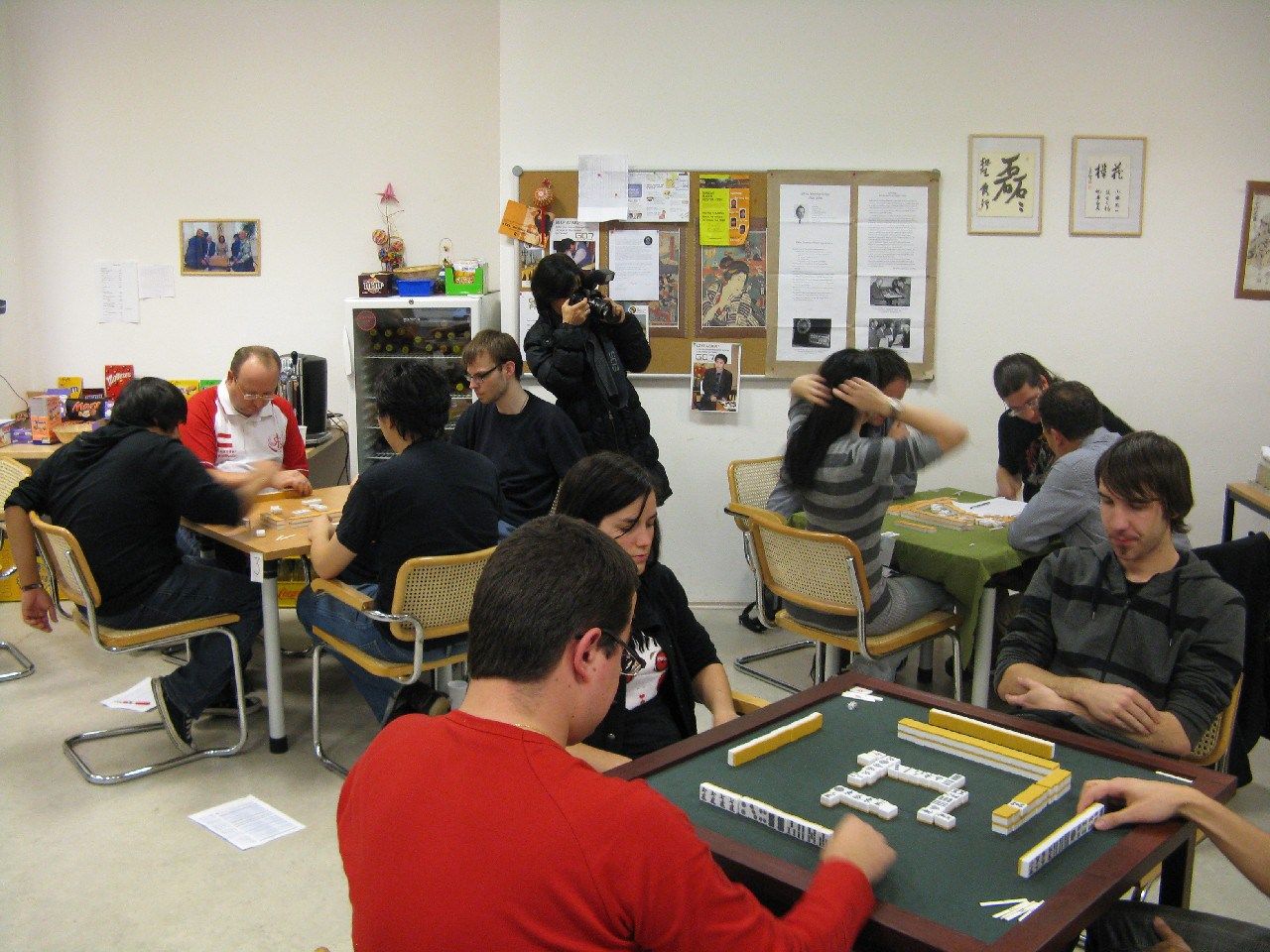 The KASU people have also announced some upcoming events: an EMA open tournament in Baden, Austria, that should take place in February 2011, and their own special thing at the end of 2011 – a tournament with Japanese rules. They also asked us, if we would like to make something in Slovakia – well, there are things planned, we just need to make them move. After this, I think many players would be happy to come and play with us, and we would love to have them here.

Finally, thanks goes to the organizers and to all the players, especially my Slovakian mahjong comrades, for this enjoyable day. Final results are up, also more photos. 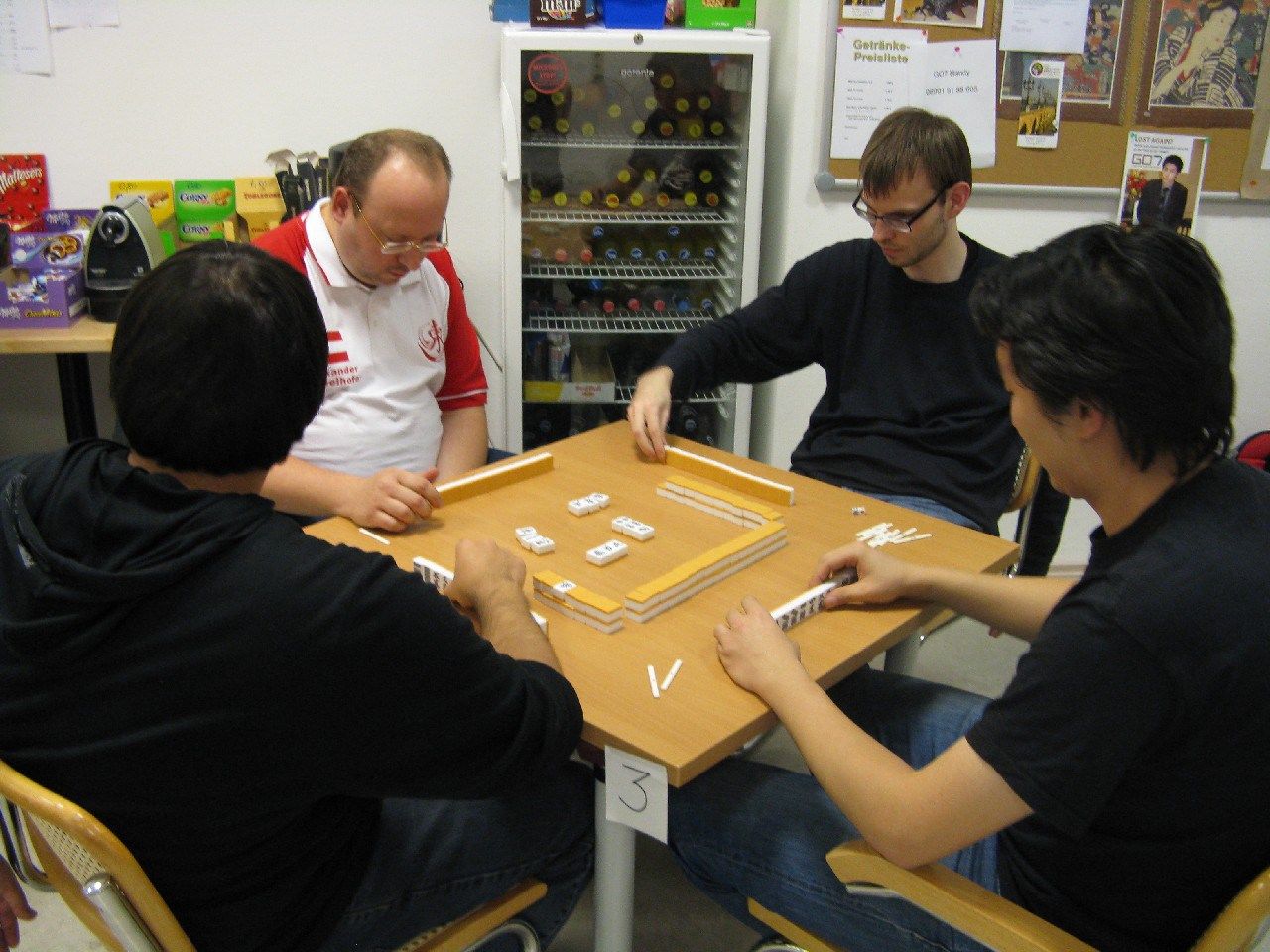 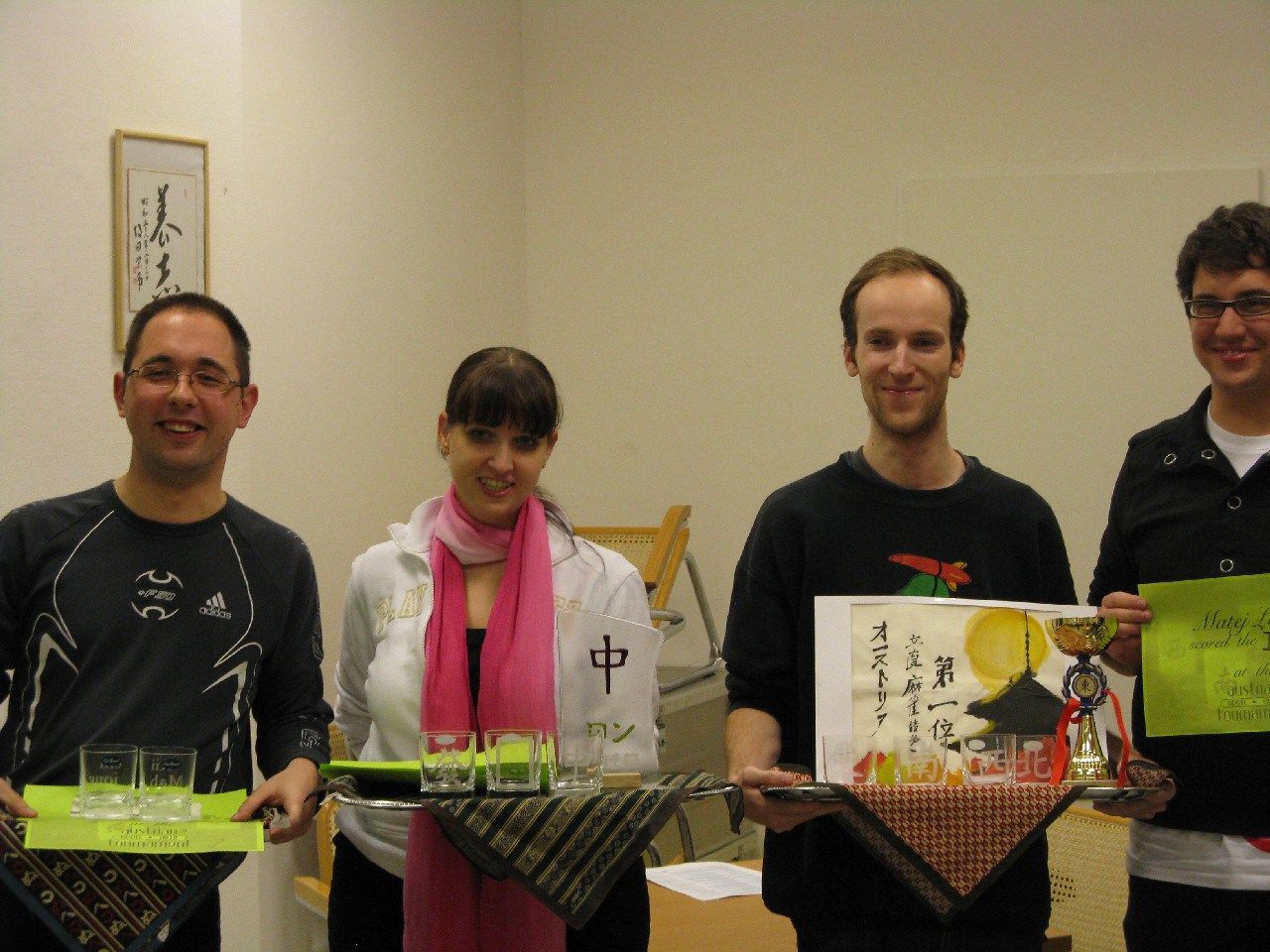