I woke up rather early. Even though I went to bed at 3am, I woke up at 6am. Jet lag? I wasn't feeling tired though. While confirming where the breakfast was, I saw Toshiyuki Tomozoe-pro (Afro-pro) from Saikouisen in the shop next door to the breakfast place. I heard the shopkeeper say they don't do breakfast and pointed to restaurants on the opposite end of the casino. As Tomozoe-pro was leaving I directed him to the actual breakfast place. 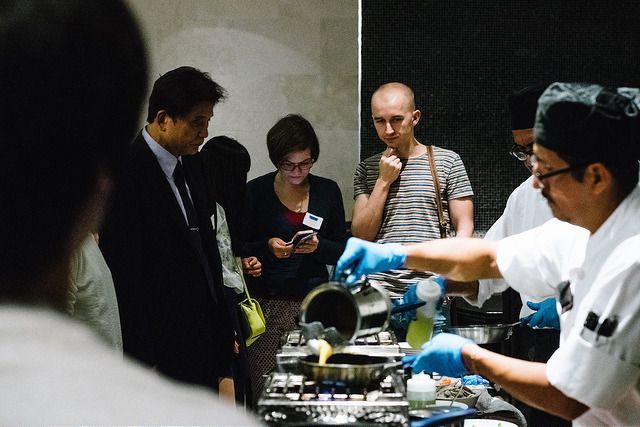 Sadly I can’t give a detailed account of all my games as I’m really bad at remembering the things that happen in games. I’m amazed when people start talking about their hand composition from a previous game as I have difficulties remembering the previous hand.

It was all going well, I had a huge lead after getting a few nice hands, like a dama sanshoku tanyao pinfu dora 3 but then Junko from LAPOM tsumo'd a chuurenpoto. I ended up 2nd with +16.1 after uma. Interestly after Junko declared tsumo (her hand was something like 111234678999p tsumo: 5p) the two JPML pros on table had to call a referee over to confirm that it was indeed a chuuren. They claimed that they had never seen a hand like that and a chuuren generally needed to have 9 waits for it to be a proper chuuren. The referee confirmed that it was a chuuren, but took a photo presumably so he could check if his judgement was correct later. After the yakuman tsumo the game was still close between me and Junko, but alas yakuman tsumo are too OP and I could not overtake her.

After the fourth hanchan JPML professionals Jenn Barr and Garthe Nelson were meant to give a talk and Q&A about being a professional in Japan but unfortunately Jenn Barr-pro was ill so she was replaced by Gemma Sakamoto-pro with Benjamin Boas MC’ing. There were tables and sets available for people who wanted to play while listening. I believe someone (Rodney from Portland?) recorded a video but I’m not sure where or if he uploaded it.

Again woke up super early, I also noticed a lot of the Japanese pros were also having this problem with as they were tweeting at 4am while also being up at 8am.

At this point I was at +20.4. A professional told me earlier that he thinks the border to get into the top 32 would be around +70-80, though it ended up being 96.7, I still definitely had a chance, until I blew it in this game. I've seemed to have attempted to forget about this game so some details are unclear, I think it was E4, I was in 1st and I riichi'd, the dealer then chased and I dealt into his haneman. Ended up losing more points and ending the game with -31.9 and shutting down any chance I had of advancing.

Very similar to another game. Going in to orasu I was in 1st, early on in the hand Aaron from the US (didn't ask which club, sorry!) attempted to chii but the pro, Kansuke Sugiura noticed Aaron had touched his next draw so he wasn't allowed to chii. I couldn't help but be reminded of Mahjong Hourouki's Ox club scene! After a few more draws Aaron declared riichi and we had to confirm with a ref that his previous offence was not a dead hand/agari houki. The ref ruled that it was OK but instructed Aaron to make sure he doesn't do it again. Aaron then tsumos a suuankou (Or a riichi tsumo honitsu yakuhai sanankou toitoi dora 3) pushing me to 2nd and 0.6 after the +5 uma. 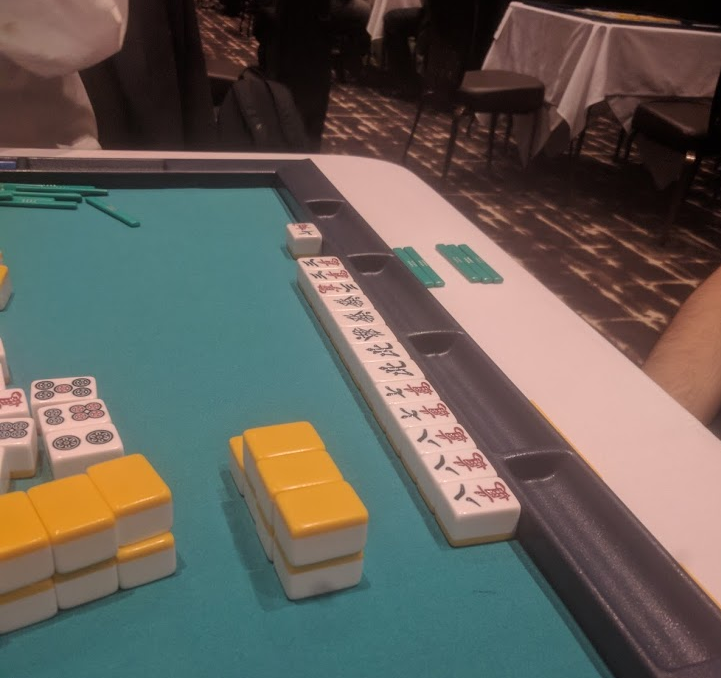 Day 4’s side event was a talk by Benjamin Boas about anime, manga and various other mahjong related culture. Unfortunately I could not listen to it all as Daniel dragged me away to go to a Japanese restaurant with him. 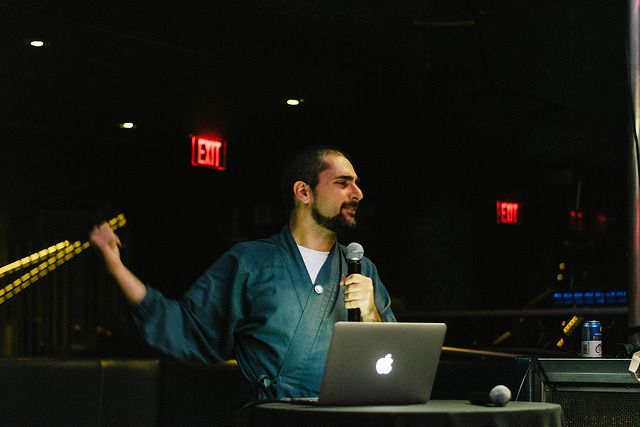 After the 9th game there was a small tonpuusen with red fives. There were a few hiccups with the organization but I don’t think there was much hope of anyone being able to run a better one. At first the organizer asked people to line up and give their names to them but they soon realized that taking the names of about 160 people would take too long so they asked everyone to randomly sit at a table and to ensure there was at least 1 professional on the table. The side event was won by Aki, who is a member of LAPOM I think. At one point they mixed him up with Aki Nikaidou-pro and had added her score to his, though I’m not sure if that was ever resolved and the true winner was ever found out.

There was a small study session for the last day where everyone played a game with a professional and after each hand the professional would try their best to give tips. Jamie Grant had set me up with ASAPIN. Tina Christensen and James Bragg completed the table. During the game Jamie interview ASAPIN and myself for Masters of Mahjong. I really enjoyed the interview and can’t wait to hopefully watch it.

Later on Moriyama-pro was giving a lesson and open hand game, with Garthe-pro assisting and translating. The lunch for today was sushi but I missed it because of Moriyama’s lesson. 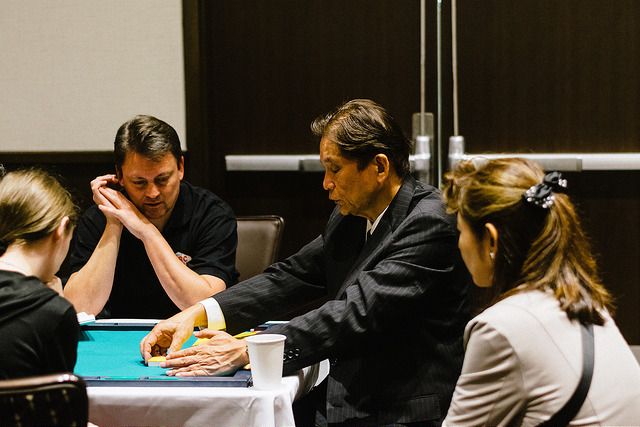 After lunch everyone converged upstairs to play shuffleboard. Everyone stopped to intently watch the final once that started however. 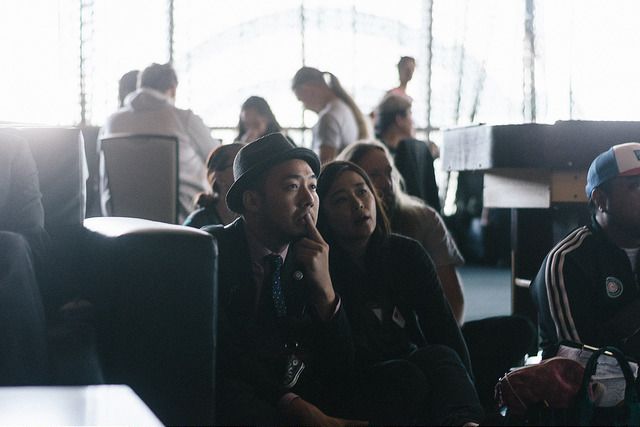 With the tournament over I booked a last minute flight to California to spend a week with Daniel. During my stay there we escorted a certain professional around San Francisco (despite living near SF for a few years now, this was also Daniel’s first time in SF) and they even treated us to a crab dinner! For the rest of the week we mostly went around to the various different clubs in CA to play mahjong. It’s really amazing how much mahjong one can play in California.